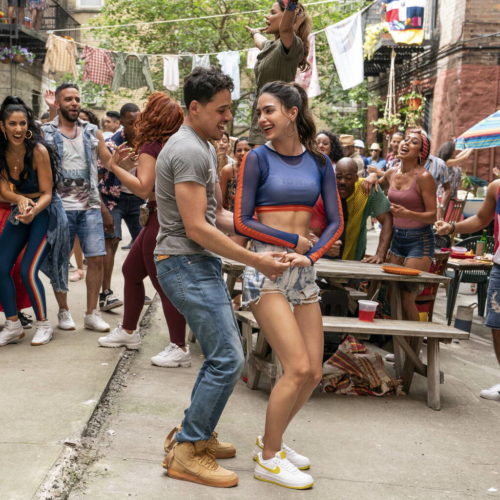 Verdict: In the Heights is a feelgood and entertaining musical celebration, with a charming lead performance from Anthony Ramos

In the Heights is an ambitious and vibrant musical which follows a close-knit community as they try to achieve their dreams.

In the Heights tells the story of a close-knit community of predominantly Latinx people in the Washington Heights neighbourhood of New York, with the film centring on Usnavi (Anthony Ramos), a bodega owner who dreams of returning home to the Dominican Republic and opening a bar on the beach.

The film also follows his love interest Vanessa (Melissa Barrera), who dreams of being a fashion designer, Nina (Leslie Grace), who returns home after dropping out of Stanford University, and her love interest Benny (Corey Hawkins).

Crazy Rich Asians director Jon M. Chu deserves praise for giving audiences an ambitious, vibrant, and entertaining musical celebration of life, heritage, and community, filmed within the heart of the neighbourhood itself.

It is extremely loyal to the stage production, is a huge step forward for Latinx representation on film, and focuses on the immigrant experience and the struggles Latinx people face in America trying to achieve their dreams.

However, sadly, it doesn’t completely work. The all-singing and all-dancing numbers should make viewers feel pure joy but they largely failed to do so. This could be because the choreography didn’t jump off the screen as it should, some numbers felt a bit flat and dull, and a lot of the songs are quite forgettable.

The standout sequences are 96,000 – which is set at a community pool – No Me Diga, set a hair salon, and the opener, In the Heights. These are fun and creative and there is some fantastic choreography, it’s just a shame that Chu kept cutting away from the synchronised group dancing too early to focus on individuals.

The film is a touch too long and the momentum dips towards the end, but thankfully, Chu brings it back for a showstopping and heartwarming finale – and make sure you stay for the post-credits scene.

Chu and Miranda, who produces and has a small role, defied studio pressure and opted against casting a big A-list star in the film and that was the right call.

Ramos – who starred in Miranda’s Hamilton – is a warm and charming leading man and his rapping is top-notch, while Barrera and Grace have gorgeous singing voices, look stunning, and bring a lot of emotion to their characters.

Other standouts were Gregory Diaz IV as Usnavi’s comical cousin Sonny; Daphne Rubin-Vega, Stephanie Beatriz, and Dasha Polanco as the sassy larger-than-life hair stylists at the salon; and Olga Merediz as the caring Abuela Claudia (the role she originated in the Broadway show).

Although it isn’t perfect, In the Heights is a spectacular summer movie that will make you feel good. It deserves to be seen on the big screen.

In cinemas from Friday 18th June.