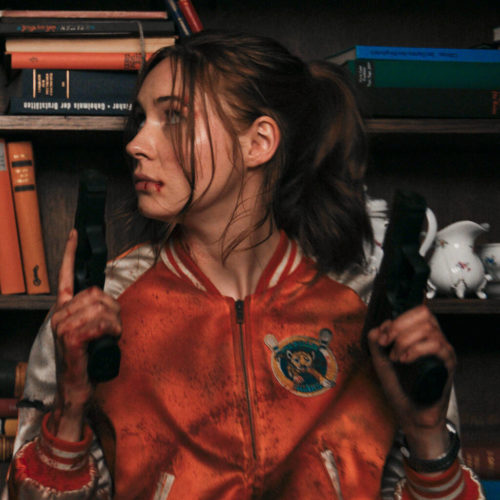 Verdict: his action-heavy caper has cool visuals and stunt sequences but is a classic case of style over substance

Karen Gillan plays a hitwoman who takes a stand against her bosses in this violent neon-soaked crime caper.

Karen Gillan has shown off her stunt skills in the Guardians of the Galaxy, Avengers and Jumanji films so she seems like the perfect fit for a stone-cold hitwoman.

In this neon-soaked crime caper, she plays Sam, whose assassin mother Scarlet (Lena Headey) disappeared after a botched mission when she was only 12 years old.

Fifteen years later, she’s now working as a hitwoman for The Firm, which her mother also worked for, and is routinely sent to “clean up” their messes.

During one high-risk job, Sam must choose between being loyal to The Firm or saving an eight-year-old girl named Emily (Chloe Coleman).

Gunpowder Milkshake is essentially a female-led John Wick and doesn’t give audiences much we haven’t already seen before – it’s a shallow shoot-’em-up that’s more style over substance.

However, despite this, it’s still an entertaining watch as the star-studded ensemble cast seems to be having an absolute blast.

If you’re just here for the action, then Gunpowder Milkshake will suit your needs as it’s basically just a bunch of action sequences strung together with minimal character development. These action scenes are violent, super stylish, and feature some cool stunt choreography, with a standout sequence featuring Sam fighting villains without the use of her deadened arms.

This film is clearly designed to be a lightweight piece of fun, but it would have been so much better if we’d known more about these characters and The Firm.

We should have spent more time getting to know Sam and “the Librarians”, a trio of Scarlet’s old accomplices featuring Anna May (Angela Bassett), Florence (Michelle Yeoh), and Madeleine (Carla Gugino). We never really know who they are as people outside of their assassin lifestyles.

Given the existing onscreen evidence of Gillan’s stunt skills, it was no surprise to see her ace these complex setpieces.

She brings a quirky energy to the character and has a sweet relationship with Coleman’s Emily, who naively believes she’s going to become Sam’s apprentice.

Director Navot Papushado made the right call casting actresses in the 50s and 60s to play the librarians as that’s so rare in film, whereas older actors get opportunities to be action stars often.

The trio was so badass, as was Headey, and they all get some fantastic fight moments. It’s also worth noting that Paul Giamatti appears here as Nathan, head of HR for The Firm, and is suitably slimy and devious.

Gunpowder Milkshake has awesome visuals and it was fun seeing these women kick ass, but it could have done with some more meat on its bones.

In cinemas and on Sky Cinema from Friday 17th September.