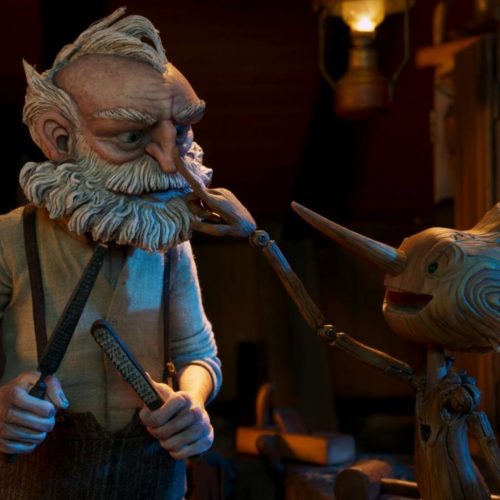 Verdict: Guillermo del Toro's Pinocchio is darker and quite different to the story you may know, but it's beautifully told and visually stunning

Guillermo del Toro brings us his take on the classic story of a wooden puppet who longs to be a boy.

Not one, but two, Pinocchio movies were released this year.

Disney’s live-action remake was quite the disappointment, but Guillermo del Toro’s dark reimagining is definitely worth seeking out.

The stop-motion animated musical fantasy tells the story of woodcarver Geppetto (voiced by David Bradley), who turns to the bottle as he grieves the death of his son Carlo. One day, he makes a wooden puppet named Pinocchio (Gregory Mann) and it is brought to life by the Wood Sprite (Tilda Swinton).

Pinocchio – whose nose grows when he lies – hopes to be accepted as Geppetto’s new son but is easily persuaded by Count Volpe (Christoph Waltz) to join his circus and become his latest star attraction. After the circus leaves town, Geppetto and Sebastian J. Cricket (Ewan McGregor) try to track him down and bring him home.

It sounds a bit darker than Disney’s 1940 animation, doesn’t it? Del Toro’s film is not a stop-motion remake of that classic – he and his co-director Mark Gustafson took elements from Carlo Collodi’s novel, The Adventures of Pinocchio, but also reimagine the tale.

The main characters are the same by name but they behave quite differently, the story has undergone various changes, and a lot of the original supporting characters have been dispensed with in favour of new faces.

As Pinocchio is made by the man behind films like The Shape of Water and Pan’s Labyrinth, it’s no surprise that it is dark, weird, and probably not one to watch with little children. A couple of the supernatural characters are very creepy, Geppetto’s grief is not simply glossed over, and it features a stop-motion version of Italian fascist leader Benito Mussolini!

The film is a stunning technical achievement. Stop-motion animation is slow, painstaking work and it’s incredible how the animators manage to make these figurines feel alive and like real people with real emotions.

The story is moving and doesn’t shy away from darkness and sadness, but it also has plenty of light, happy moments to balance it out. There are a few musical numbers too but it’s not a film where they burst into song every five minutes.

Del Toro has brought his distinctive storytelling sensibilities to a classic tale and transformed it into something fresh, surprising, and absolutely wonderful.

Streaming on Netflix from 9th December.