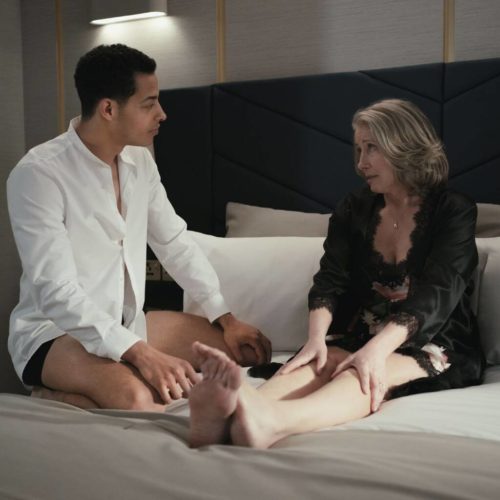 Good Luck to You, Leo Grande

Emma Thompson plays a retired schoolteacher and widow who hires a sex worker named Leo Grande for a night of passion.

When films are set in one location, they can become quite boring if the script and performances aren’t interesting enough.

But, thankfully, this isn’t the case with Good Luck to You, Leo Grande.

She has been craving adventure, human connection, and sexual fulfillment since her husband passed away two years before.

But now the moment has finally arrived, she is freaking out and about to lose her nerve.

Enter Leo Grande, a relaxed young Irishman who knows how to put his customers at ease.

You can rest assured that this film is not a seedy story filled with tonnes of sex.

It is more about Nancy’s journey from being sexually repressed to empowered and the human connection between her and Leo. There isn’t much sex in it at all.

The film is almost entirely set in a nondescript hotel room and that could have been dull if it wasn’t for Thompson and McCormack’s gripping performances and Katy Brand’s script.

Brand has created two well-observed and well-rounded characters who gradually reveal more about themselves and peel their layers back as they relax into their conversations.

Her script also tackles the taboo subject of sex work and feels almost subversive in that Leo is so upfront and unashamed about the way he makes a living.

Nancy required a stripped-back and intimate portrayal from Thompson and she is excellent.

Nancy is an emotional character and her journey is surprisingly quite moving.

McCormack may be the lesser-known of the duo but he doesn’t let the team down.

His Leo is smooth and charming but that facade changes when Nancy starts to poke around in his private life.

The concept may give many the wrong idea about this film.

It is a lovely, amusing and surprisingly touching movie about self-acceptance, with two intriguing characters and terrific performances.

In cinemas from Friday 17th June.