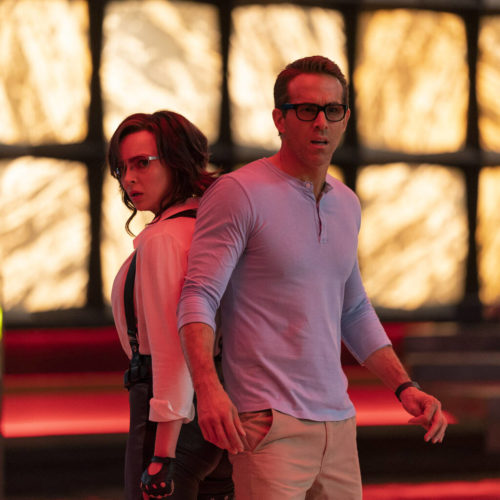 Verdict: Free Guy may not quite hit all the right humorous notes, but it makes up for it elsewhere.

Over the past decade, Ryan Reynolds has carved out a career as cinema’s good-looking, wise-cracking everyman in films like Deadpool, The Hitman’s Bodyguard and their sequels.

So he’s perfectly cast in his latest role, in Free Guy, a new fantasy comedy from Night of the Museum director Shawn Levy.

In it, he plays Guy, a ‘Non-player character’, or NPC, in Free City, a computer game that’s something of a cross between Grand Theft Auto and Fortnite – allowing players to wander through an urban landscape completing murderous, criminal quests.

Guy then is more accurately described as cheerful cannon fodder – a bank teller who happily turns up at work each day with his best pal Buddy (Lil Rel Howery) and smiles through heist after heist without complaint.

There’s much fun to be had with this premise – which has echoes of The Lego Movie, and visuals that mix elements of Ready Player One and Inception – but it’s the goings-on outside the game that drive forward its plot.

Guy’s “life” changes when he sees Molotov Girl (the inevitably excellent Jodie Comer), a player in the game who he finds himself inexplicably drawn to, breaking his programming.

She believes her nemesis has repurposed their own project – an evolving paradise world that utilises artificial intelligence (AI) – into his own addictive, violent game.

There’s plenty of room for cinematic in-jokes, with The Truman Show getting an obvious nod, and riffs on computer game culture – Channing Tatum turns up as the meathead avatar of a stereotypically antisocial gamer.

But although fun, sometimes the humour doesn’t quite fizz as you’d expect from a Reynolds vehicle – perhaps because the restrictive nature of his character means there’s a lot of repetition until late in the day. Waititi is also strangely grating as Antwan – even for a villain.

Yet what saves Free Guy from being little more than an excuse for vibrant visual effects is its heart.

It uses its musings on artificial intelligence – it’s no spoiler to say Guy’s gradual self-awareness has implications beyond Reynolds being able to deliver pithier quips – as a jumping-off point for a strangely touching three-way romance and morality tale.

In the end, that more than makes up for the fact it’s not got the relentless machine gun humour we’ve come to expect from its main star.

In cinemas from Friday 13th August.