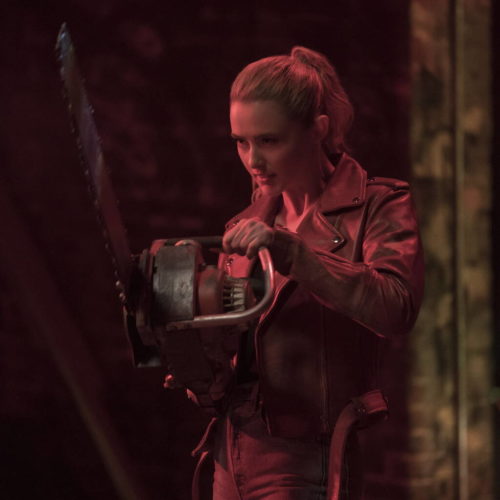 Verdict: Freaky is an absolute blast!

There have been some great body-swap films throughout the years – Freaky Friday, Big, 17 Again – and now Freaky can be added to that list.

This horror-comedy tells the story of The Butcher (Vince Vaughn), a serial killer who pops up in Blissfield around Homecoming and kills a bunch of high school kids.

But he makes a mistake when he attempts to kill Millie (Kathryn Newton) using a sacrificial knife, and instead of murdering her, they swap bodies.

Body swaps always have so much potential for comedy and that is certainly the case here. Not all the jokes work but the success radio was still pretty high.

It was a genius move casting a man as tall and well-built as Vaughn to play an awkward high school girl and his performance is hilarious.

He really threw himself into the role and nailed Millie’s persona – the pitch of his voice, how he delivers his lines, how he holds his arms/hands, runs, claps and squeals are all perfect.

Vaughn has the showier part and gets more to play with than Newton. When she becomes The Butcher, she just dresses more confidently, barely speaks, has an evil look in her eye and walks in a slow, lumbering manner with hunched shoulders.

This film isn’t scary but it’s extremely violent and gory, with some of the kills being more hardcore than you might expect.

There is also more heart to this than you would predict and addresses the death of Millie’s father in a surprisingly heartfelt way.

Freaky is an absolute blast and such an entertaining cinema trip. Make sure you keep your eyes peeled for all the references to classic slasher films!

In cinemas from Friday 2nd July.