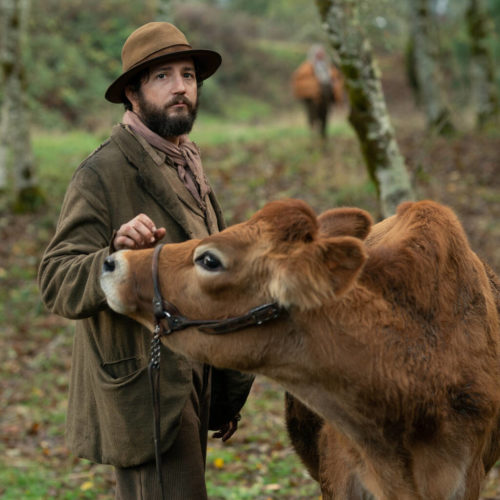 Verdict: Despite a story that builds to an exciting and tense third act, First Cow is too slow and sparse to win over everybody

Kelly Reichardt’s latest film tells the story of two men who conjure up a scheme to steal milk to make baked goods.

Kelly Reichardt’s latest feature First Cow has been receiving critical acclaim since it premiered at Telluride Film Festival last year and it is finally coming to U.K. cinemas on Friday.

The film is set in 1820s Oregon and follows Otis ‘Cookie’ Figowitz (John Magaro), a skilled cook who has joined a group of fur trappers.

One day, he meets a Chinese immigrant named King-Lu (Orion Lee) and they become friends, with Cookie expressing his desire to one day open a bakery.

When Chief Factor (Toby Jones), a wealthy Englishman in the settlement, gets a cow, the first in the region, Cookie and Lu come up with a sneaky scheme – to steal some of the cow’s milk during the night to make baked goods to sell the following day.

Like Reichardt’s most recent film Certain Women, First Cow will certainly test your patience and concentration. She is known for her minimalism and this is just as sparse as her other work.

The story is good but it didn’t need to be told over two hours – it’s so simple it should have been 90 minutes at most.

The first half was the most challenging as not much happens and the pacing is so slow that it’s difficult to get invested in the characters, become involved in the storyline, or even stay focused or awake, but rest assured your patience will be rewarded.

In the second half, the narrative becomes far more interesting, the pace picks up, and tension starts to build as you wait for the duo’s scheme to inevitably be discovered.

It actually becomes quite exciting and the pay-off is worth it in the end, so it’s a shame viewers have to endure a slow-moving slog to get there.

Despite the critical acclaim suggesting otherwise, First Cow won’t be for everyone as it is so minimalist and glacially paced.

However, it really hits its stride in the second half and the story becomes exciting and enjoyable.

In cinemas from Friday 28th May and on MUBI from 9th July.