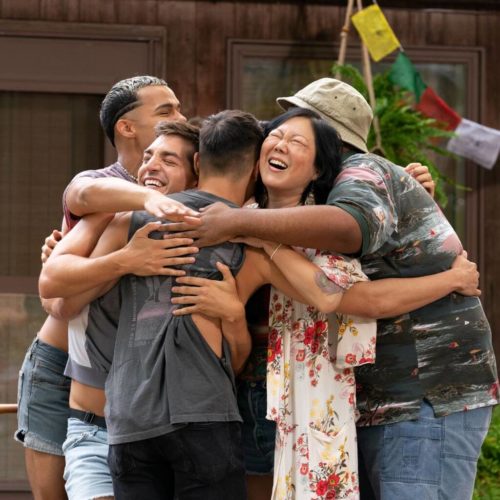 Verdict: Fire Island is hilarious, entertaining and such a good time. If you're after an easy, fun watch, this one is for you!

A group of queer friends head to the popular gay destination Fire Island for their traditional summer holiday.

Jane Austen’s classic Pride and Prejudice has been reimagined countless times over the years – and the latest interpretation, Fire Island, is coming our way.

Noah is attractive and has no problem scoring hook-ups so he makes it his mission to get the sensitive and less good-looking Howie laid before the end of the week.

He is so confident he will succeed that he decides to abstain from sex himself until Howie scores, something he will come to regret.

No Pride and Prejudice reimagining would be complete without a Mr. Darcy-style character.

In Fire Island, he comes in the form of Will (Conrad Ricamora), a cold, reserved lawyer who seems intrigued by Noah, despite them being completely different.

Fire Island is hilarious, entertaining, and such a good time.

Booster wrote a really sharp, clever screenplay that feels relatable, has a wicked sense of humour, and is littered with pop culture references and fantastically mean lines.

The music choices are also excellent and the film puts Britney Spears’ 1999 single Sometimes back in the spotlight thanks to an impromptu a capella performance.

Comedians Booster and Yang are friends in real life and their chemistry really shines through as Noah and Howie.

Their conversations were fun to watch but there is also some conflict as they have different approaches to sex and dating but Noah keeps pushing for Howie to use his tactics.

A lot of gay romcoms are watered down to stop them from potentially alienating the mass audience.

Fire Island does not seem concerned with that – it is loud and proud and definitely not aimed at the PG crowd.

Fire Island isn’t a total success. For one, it is a little predictable, a common problem with romantic comedies.

Secondly, Will and Noah are possibly a bit too different for their will-they-won’t-they storyline to be effective. Viewers may not care if they get together or not.

Besides those minor niggles, Fire Island is still worth a watch if you’re after a fun, easy watch with a cast of (mostly) wonderful characters.

On Disney+ from Friday 3rd June.