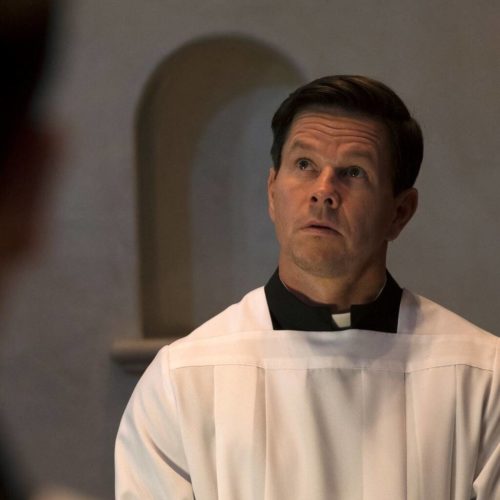 Verdict: Mark Wahlberg's passion for Stuart Long's story shines through in his performance but the material needed to be more compelling

Mark Wahlberg developed, produced and starred in Father Stu and put his own money into it so it’s fair to say the film is a passion project.

After he is forced to give up boxing due to health problems, Stu moves to Hollywood to become an actor, with little success.

One day in the supermarket, he meets Carmen (Teresa Ruiz), a devout Catholic woman, and starts attending her church in an effort to win her over.

After a near-fatal accident, Stu has an epiphany and shocks everyone when he decides to become a priest.

His criminal history, taste for alcohol and potty-mouthed, aggressive nature doesn’t make him a likely candidate and he has to work hard to convince his superiors otherwise.

Father Stu is clearly a passion project for Wahlberg – it aligns with his Christian values and Stu’s early life mirrors the actor’s own, given his past convictions.

He gained 30 pounds to portray Stu later in life and it’s an impressive physical transformation from the usually buff Wahlberg.

He was perfectly cast for the earlier part of Stu’s life as he has the right charm, gift of the gab, and has no issue with the motormouth dialogue.

His performance becomes less convincing in the latter half when Stu is diagnosed with the degenerative muscle disorder inclusion body myositis (IBM).

The drama becomes much more serious and emotional and his performance didn’t feel authentic enough.

Stu’s story is really quite tragic and sad, but for some reason, the movie isn’t as moving or compelling as it should have been.

However, it’s worth noting that your reaction to it will vary greatly depending on your relationship with religion and how you feel about the concepts of forgiveness and redemption.

Stu packed a lot into his short life and Ross tries to cover as much as possible in her film.

The narrative skims over his earlier life a bit too quickly so you don’t get invested in his journey.

There were certain aspects, such as Stu’s tumultuous relationship with his alcoholic father Bill (Mel Gibson), that needed more depth and exploration instead of being quickly brushed over.

Perhaps viewers would care more about the protagonist if his life before he found God was given more substance.

It is also difficult to invest in a person who isn’t very likeable and makes bad choices – and that’s Stu in the beginning. But, the whole point of the film is him becoming a completely different person after finding Catholicism.

In cinemas Friday 13th May.