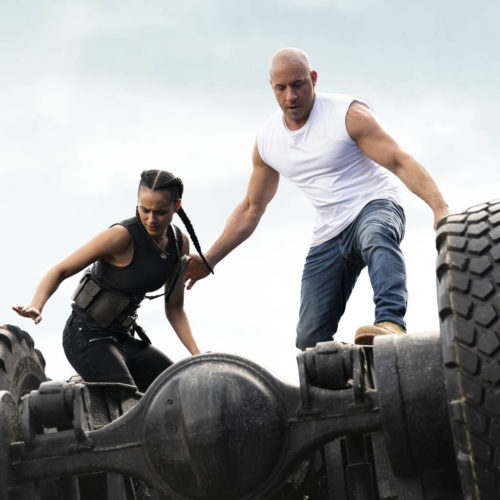 Verdict: The film is as silly and ridiculous as we've come to expect from the Fast franchise, but this one's plot is flimsier and more forgettable than usual

Dominic Toretto and his team are faced with their most personal nemesis yet – Dom’s evil estranged brother Jakob.

Vin Diesel, Michelle Rodriguez and co. are back for more high-octane action that defies the laws of physics.

The ninth instalment, also known as F9, opens with Dom (Diesel) and Letty (Rodriguez) living the quiet life on a farm after retiring from the business.

That doesn’t last long as they are soon summoned by a video message from Mr. Nobody (Kurt Russell), who informs them that he had captured the villain Cipher (Charlize Theron) but his plane was attacked by rogue agents.

The team – also consisting of Roman (Tyrese Gibson), Tej (Ludacris) and Ramsey (Nathalie Emmanuel) – go to help and inside the fallen plane, they discover one half of a device named Aries, which can hack into any satellite system when paired with its other half and an activation key.

After Dom’s brother Jakob (John Cena) shows up and steals the first half, the team must track him down and make sure he doesn’t get the other pieces.

Audiences have a good idea of what to expect going into a Fast & Furious film these days – fast cars, ridiculous stunts, invincible characters and tons of action setpieces – and the ninth instalment ticks all those boxes and then some.

Putting the absurdity of the action to one side, this film is still one of the weaker outings and this is largely down to the plot.

The franchise isn’t known for telling strong stories but this one is more flimsy and forgettable than average and basically consists of the team’s tech whiz Ramsey dropping the next load of exposition to get the actors to the next location and setpiece.

And although each stunt looks cool and it’s entertaining to laugh at the sheer insanity of it, there are hardly any stakes at all because the characters rarely ever die or even get injured these days, and if they do, they will eventually come back!

In a surprising turn of events, director Justin Lin tries to give us some character depth and delves into Dom and Jakob’s backstory – possibly to make up for the fact that they’ve added a brother out of nowhere after nine films.

Vinnie Bennett was well cast as the young Dom but Finn Cole from Peaky Blinders didn’t seem like the right fit for a John Cena. There were too many flashbacks and they interrupted the flow of the central story.

Diesel is the driving force of the franchise yet he is the most bland presence onscreen in this film, with Rodriguez not doing much better. Cena didn’t come across as suitably threatening, especially in comparison to Theron’s cold and calculating Cipher (who is wasted this time around).

There are some wins for the ladies here too – Brewster has been given an upgrade and gets to do some stunts of her own, Helen Mirren is back for a fabulous but completely unnecessary car chase, and Ramsey is given much more to do and is a prominent source of comedy.

But the standouts of this film are Roman and Tej – they lean into the silliness more than any of the others. They offer up personality and humour in a film often devoid of it, bring much-needed comedy and lightness to proceedings and deliver plenty of laughs.

Diehard fans of the franchise will likely be satisfied with F9 because it does exactly what you would expect it to. The films are best enjoyed if you just switch your mind off at the door and let yourself be entertained by the ridiculousness of it.

In cinemas from Thursday 25th June.