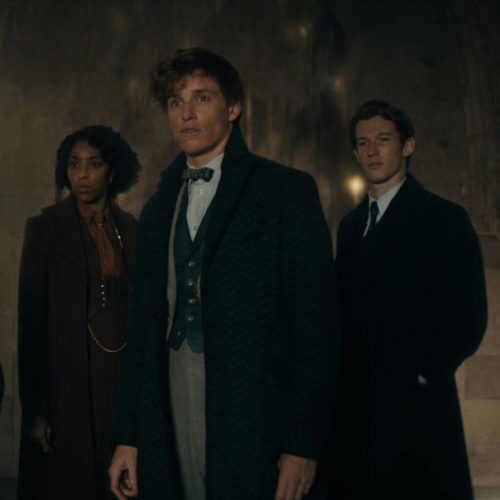 Fantastic Beasts: The Secrets of Dumbledore

Verdict: The third Fantastic Beasts film is far better than its predecessor and a surprising amount of fun, with a strong turn from Mads Mikkelsen

Newt Scamander forms a team to prevent Gellert Grindelwald from becoming the head of the wizarding world.

After the lacklustre The Crimes of Grindelwald and numerous controversies and delays, you might think that the latest Fantastic Beasts film, The Secrets of Dumbledore, isn’t very good – but you’d be mistaken.

The third film in the Fantastic Beasts franchise, itself a spin-off of the Harry Potter series, is set in the 1930s.

It follows quirky magizoologist Newt Scamander (Eddie Redmayne) after he is asked by Albus Dumbledore (Jude Law) to form a team to stop whatever the evil Gellert Grindelwald (Mads Mikkelsen, replacing Johnny Depp) is plotting.

Newt assembles his brother Theseus (Callum Turner), his assistant Bunty (Victoria Yeates), his muggle (non-magical) friend Jacob (Dan Fogler), and Professor Hicks (Jessica Williams), and together, they try to prevent Grindelwald from becoming the head of the wizarding world.

After the mediocre second film, audiences will likely have low expectations for this follow-up, but thankfully, this is a vast improvement and a surprising amount of fun.

There is a great sense of humour and plenty of laugh-out-loud moments in the lighter, more whimsical scenes involving the Fantastic Beasts, particularly Pickett and Teddy, Newt’s hilarious pets.

There are also a couple of new animals, with an adorable Bambi-like creature called a Qilin (pronounced Chillin) likely to make everyone in the audience go “aww!”

Unfortunately, these scenes only make up a small portion of the film, even though they are the strongest and make it as enjoyable as it is.

The rest of the movie is largely free from the fun beasts and is dark and serious, although there’s some levity to be found sometimes.

It’s quite hard to follow the main story as there are so many characters and so much going on within the lengthy two hour 22-minute runtime.

It felt like it was building to a big battle but that is clearly being saved for another movie so the conclusion is quite underwhelming and may leave you wanting more.

Mikkelsen was drafted in to play Grindelwald after Depp lost his libel case.

He should have played the character from the start because he’s so perfect for the role. He naturally oozes a sinister, menacing energy and doesn’t have to do very much to make Grindelwald’s evilness believable, whereas Depp had to do more with his appearance.

He also has terrific chemistry with Law and the tension between the former lovers (a storyline revealed in the previous film) is palpable.

The film discusses their past relationship more openly and plainly than expected and it deserves kudos for that.

Redmayne and Fogler are as entertaining as ever, while Williams – who has much more screentime here – is very charismatic as Professor Hicks.

It’s still unknown what has happened behind the scenes with the Fantastic Beasts team and Katherine Waterston, but her character has been reduced from a prominent role to just two scenes, which is a shame.

The Fantastic Beasts franchise has never managed to capture the magic of the Harry Potter series but at least this film breaks the sequel rule of being better – not worse – than its predecessor.