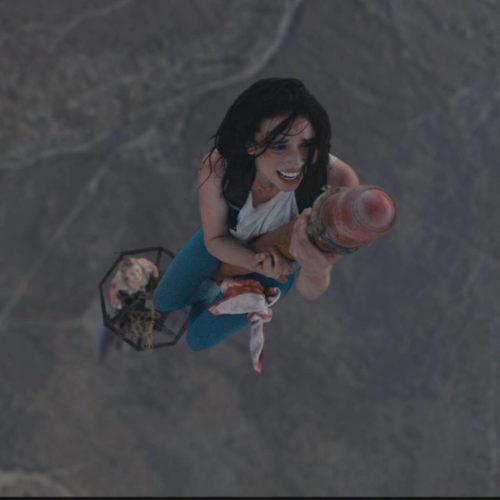 Verdict: Fall is a thrilling and immersive survival movie with stomach-churning downward shots that may give you a fear of heights!

Best friends and adventurers Becky and Hunter climb up a 2,000ft radio tower – and get stuck at the top.

If you’re afraid of heights, look away now! Even the least afraid will have that tested by the vertigo-inducing Fall.

Scott Mann’s survival thriller stars Grace Caroline Currey as Becky, a widow who is grieving the death of her husband Dan (Mason Gooding), who died in a climbing accident almost a year before.

Her best friend Hunter (Virginia Gardner), a daredevil YouTuber and influencer nicknamed Danger D, returns home after her travels and convinces Becky to get back into climbing.

She wants Becky to join her for her next stunt – climbing a radio tower in the middle of the California desert.

The rusty tower has been abandoned for years and is no longer structurally sound – which they discover once they’re at the top!

This means the majority of the action takes place on a tiny metal platform which can barely fit two people 2,000 ft up in the air.

Becky and Hunter are exposed to the strong winds and desert sun and have no means of communicating with others or getting back down.

The film is shot in a way that places you right up there with them on that precarious platform.

They always say “don’t look down” when climbing and that’s certainly true here – the downward-facing shots are stomach-churning and thrilling.

You might be wondering how a film like this could sustain a feature-length movie considering they get stuck on the platform within the first half hour.

There are times when it falls flat and becomes less exciting as it gets into the drama between the two friends but there are enough nail-biting stunts and problem-solving discussions throughout to keep you entertained.

The movie requires serious teamwork and Currey and Gardner work together well.

Their roles are physically taxing and require serious upper body strength. Yet, they look very capable and convincing as climbers.

Also, keep an eye out for The Walking Dead‘s Jeffrey Dean Morgan in a small but important role as Becky’s kind and caring father.

Fall is a silly but well-executed and immersive film that offers a fun time at the cinema.

In cinemas from Friday 2nd September.