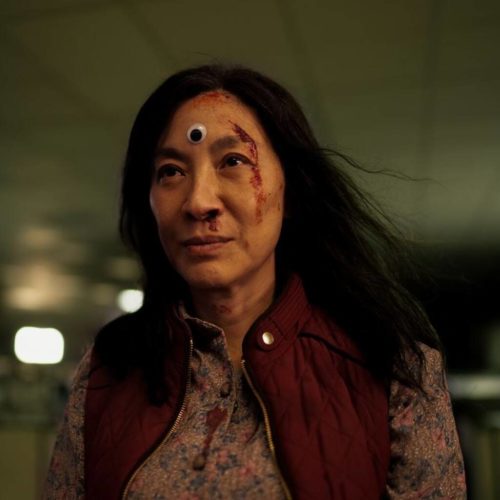 Everything Everywhere All At Once

Verdict: This action-comedy is very weird and absurd but it is the most imaginative and original film you'll see in a while

Michelle Yeoh plays a woman who must learn to travel the multiverse to defeat a powerful being in this offbeat action-comedy.

After weeks of hype surrounding Everything Everywhere All At Once in the U.S., the film is finally coming to U.K. cinemas.

She is spinning too many plates – running the family’s laundromat, planning a New Year’s party, preparing for a tax audit – and cannot give anything or anybody much of her time or attention, including her husband Waymond (Ke Huy Quan) and daughter Joy (Stephanie Hsu).

During a meeting with her IRS agent Deidre (Jamie Lee Curtis), Waymond’s alternate self “Alpha Waymond” appears and introduces Evelyn to the multiverse.

She must connect with different versions of herself to acquire new skills in order to stop the powerful being Jobu Tupaki.

If you’ve seen Daniels’ previous film, 2016’s Swiss Army Man, you might have some idea how bonkers and absurd this will be – after all, its predecessor did feature Daniel Radcliffe as a flatulent corpse!

Everything Everywhere is bold, audacious, funny, unexpected, and unlike anything else you will see at the cinema right now (or have seen in recent memory).

It might be too crazy and offbeat for some viewers, but it has something to offer everyone – action, comedy, fantasy, sci-fi, martial arts – and is ultimately a heartfelt family drama.

The fight sequences are exciting and refreshing, with Quan’s use of a bum bag/fanny pack as a weapon being a particular highlight.

The action is creative and features a weird and wonderful array of items as weapons.

However, the story is really overwhelming and hard to follow and it might not make sense under close scrutiny.

We have to learn how the multiverse works in this film quickly and it’s a lot to take onboard.

Plus, you really feel the 139-minute runtime in the second chapter (there are three) as the momentum lags and there are too many cuts back and forth between universes.

Yeoh has been given a rare meaty role in which she can showcase her martial arts skills and acting prowess and she is excellent.

Hsu brings the emotion as the centre of the drama, and Quan – an ’80s child star best known for The Goonies and Indiana Jones and the Temple of Doom – impressively switches between the nerdy Waymond and his badass Alpha version.

All three of them have to transition between their different multiverse selves and the transformations are astounding.

Everything Everywhere All At Once makes very bold swings and not everyone will appreciate how weird it is. However, it is the most imaginative and original film you’ll see in a while, without a doubt.

In cinemas from Friday 13th May.