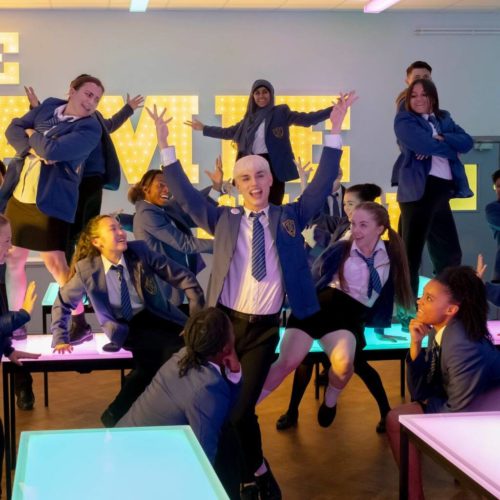 Verdict: This movie musical is fun and has its heart in the right place but it's too average and forgettable to be truly exciting

The movie musical tells the story of Jamie New, who wants to become a drag queen and wear a dress to prom.

Considering its success on the West End stage, it was only a matter of time before Everybody’s Talking About Jamie got the movie adaptation treatment.

The movie musical tells the story of Jamie New (Max Harwood), a gay 16-year-old who doesn’t fit in at his Sheffield school.

He has always dreamed of being a drag queen and begins his drag career in earnest when his mum Margaret (Sarah Lancashire) gifts him glittery red stiletto heels for his birthday.

As expected, he is faced with prejudice at school, but Jamie leans into his new persona and decides to wear a dress to the school’s prom, which ruffles feathers amongst the teaching staff.

Everybody’s Talking About Jamie is sweet and fun, delivers a lovely message about acceptance and being your authentic self, and has a tonne of heart, but it fails to replicate the magic of the stage musical.

It is very loyal to the original production, so it suffers from the same issues, such as the songs – except the title track – being rather forgettable.

However, the film also lacks pizzazz with its musical numbers – Work of Art has some cool staging, the title song has enjoyable choreography, and the prom-based ones were fun to watch, but the rest just didn’t have that spark.

Plus, with the exception of Harwood, nobody had an amazing singing voice; they were just fine.

Although the stage show is a great night out, there’s no denying the storyline is flimsy, yet it somehow feels even more lightweight as a film.

Perhaps when the crowd-pleasing performance aspect is stripped away, you notice more of its flaws.

The message, despite how worthwhile it is, is not remotely subtle and most of the supporting characters are stock stereotypes, particularly Ralph Ineson as Jamie’s dad Wayne, who has basically disowned his son as he’s not a man’s man, and Samuel Bottomley as Dean Paxton, the school bully.

Harwood was a strong casting choice for Jamie, he can sing and dance (in towering heels no less) and also has some heavier emotional scenes to lead. He is fabulous as his drag act Mimi Me and it’s a shame we didn’t see him as her more often.

Elsewhere, Grant brought the perfect mix of fabulousness as Loco Chanelle and world-weariness as Hugo, while other notable supporting cast members include Lauren Patel as Jamie’s best friend Pritti Pasha and Shobna Gulati, reprising her stage role as his mum’s best friend Ray.

Everybody’s Talking About Jamie has its heart in the right place but it’s too average and forgettable to be a truly exciting movie musical.