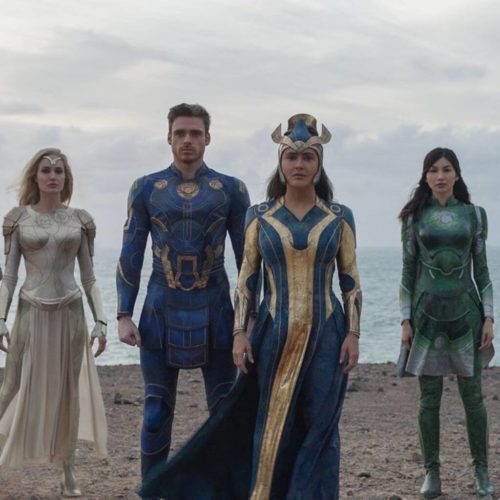 Verdict: Despite a terrific star-studded cast and stunning cinematography, Eternals is too long, too slow, and too muddled to really work

This epic film tells the story of the Eternals, immortal beings who are sent to Earth to protect the human race from the evil Deviants. After the Deviants are wiped out, the Eternals, who have lived on Earth for thousands of years, choose to stick around and live human-like lives, but their peace is disrupted when the Deviants return and start hunting down Eternals instead of humans.

The Eternals are portrayed by a seriously star-studded cast, including Gemma Chan as Sersi, who is now a teacher in London, Salma Hayek as group leader Ajak, Richard Madden as the most powerful Eternal Ikaris and Angelina Jolie as fearsome warrior Thena.

Eternals is one of the most ambitious and expansive films Marvel has ever made. As they have been around for so long and live so far apart, there is a lot of time and location-hopping involved. While some of these jumps are necessary for backstory, it flashes back too often and gets in the way of the main narrative, preventing the story from picking up pace and forward momentum.

There are loads of characters and concepts to introduce and content to pack in, so there is a lot of clunky exposition, especially in the first half, and the film is far too long at two hours and 37 minutes. It was also too slow and the narrative felt overstuffed and messy.

Although she doesn’t quite succeed with the story, Zhao deserves praise for putting together the most diverse superhero cast yet and making breakthrough strides with onscreen representation, in terms of race, ability (deaf actress Lauren Ridloff plays Makkari) and sexual orientation, with Brian Tyree Henry’s Phastos having a husband and getting Marvel’s first gay kiss, a scene which is tastefully done and doesn’t feel like it’s pandering to audiences.

Zhao’s films, like Nomadland and The Rider, feature her trademark naturalistic and observational directing style and eye for cinematography – and the latter is evident in Eternals. It looks different visually to the usual Marvel fare – it is mostly shot on location with natural light instead of a green screen studio – and the landscape shots are stunning.

Eternals’ greatest success is the cast. Hayek brought gravitas to Ajak, Chan made Sersi the most sympathetic Eternal, Barry Keoghan was charming as Druig, and Henry brought great emotion to Phastos, while Kumail Nanjiani and Harish Patel stole every scene as the hilarious Eternal-turned-Bollywood star Kingo and his trusty valet Karun, respectively.

It was great to see Jolie wielding weapons and kicking butt once again, even though she was relegated to the sidelines most of the time, and the biggest disappointment was Madden, who seemed so wooden as Ikaris.

Marvel took a gamble hiring an indie director and while it hasn’t quite paid off, it would be a shame for them to return to the same directors and same old formula – they need to keep making these interesting choices going forward.

In cinemas from Friday 5th November.