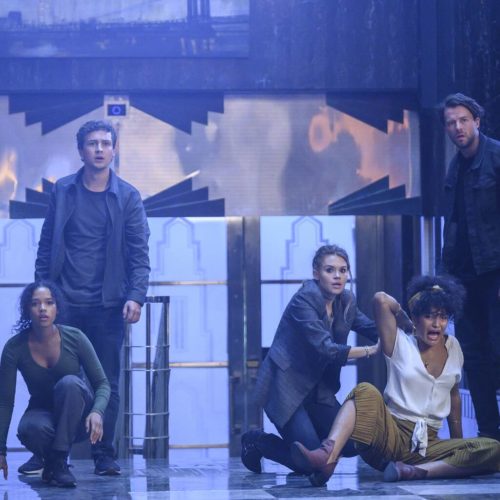 Verdict: This psychological horror sequel isn't perfect but it still makes for a thrilling and enjoyable cinema trip

Taylor Russell and Logan Miller are back for more escape room horror in this follow-up to 2019’s Escape Room.

The psychological horror movie Escape Room was a commercial success back in 2019, and fans haven’t had to wait long for its sequel, Tournament of Champions.

After surviving a series of harrowing, deadly escape rooms designed by the evil Minos Corporation, Zoey (Taylor Russell) and Ben (Logan Miller) go to New York to take down Minos and serve up justice for the people who died in their game.

However, the corporation is always one step ahead and they once again find themselves trapped in another series of life and death escape rooms, although this time they are joined by fellow Minos survivors – Brianna (Indya Moore), Rachel (Holland Roden), Nathan (Thomas Cocquerel), and Theo (Carlito Olivero).

Adam Robitel, who returns to direct the sequel, has managed to come up with another set of inventive and clever rooms, traps, riddles, puzzles, and clues, with barely any repetition from the previous film.

The production design of the different rooms is impressive – the Minos Corporation really spares no expense with their games!

It was thrilling and exciting watching the team work together to find out the next steps to escape the room and observing what they have to do in each new set, and the threat of a lethal element to the room looms large over each game.

Robitel effectively builds the tension and suspense as time starts to run out and it’s a gripping watch, although the stakes don’t feel very high because you know that Zoey and Ben will make it.

Given that the escape rooms are the focal point of this movie, it’s no surprise that there isn’t much in the way of character development because there’s no time for that when they’re constantly fighting for survival, exchanging clues, and panicking about how little time is left on the clock.

There are some welcome mini-breaks in between in which our characters get to talk more about themselves and taking down Minos, but then it’s onto the next one.

Some viewers might find this relentless run of rooms monotonous but each set is so different that it’s interesting and exciting. However, the franchise will run out of steam soon – poor Zoey and Ben can’t do more escape rooms, surely? – so they should end it after the inevitable third instalment.

Russell is a warm, kind, and likeable presence and she is very brave and determined to beat Minos, whereas Miller’s Ben is more reluctant and scared.

They have strong support from the newcomers, particularly Roden as the strong-willed Rachel and Moore as the nervous Brianna, even if the characters are thinly written.

It isn’t perfect, but Escape Room: Tournament of Champions makes for a thrilling and enjoyable cinema trip.

In cinemas from Friday 16th July.