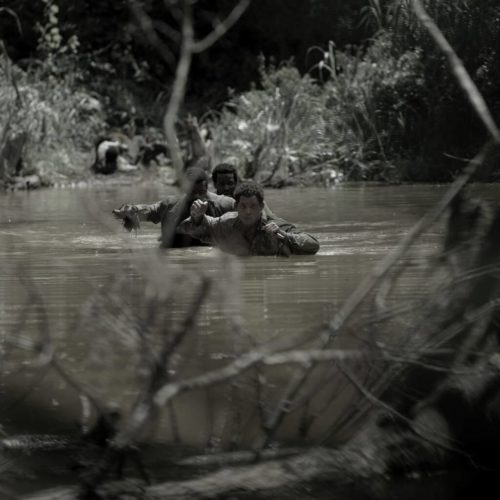 Verdict: Emancipation unexpectedly transforms from a slave drama into an action movie into a war film but Will Smith's performance holds it all together

Will Smith plays a slave on the run through Louisiana’s swamps and bayous during the U.S. Civil War.

After months out of the spotlight, Will Smith has made his movie comeback with Antoine Fuqua’s slave drama Emancipation.

The film is set in the period between Abraham Lincoln declaring all slaves free in 1863 and the slaves actually being liberated by the Union Army up to two years later.

During this time, many slaves made a break for freedom, such as our protagonist Peter (Smith).

The film follows him and his friends as they run away from their railroad construction site with their owner Fassel (Ben Foster) in hot pursuit.

Peter must run through alligator-filled swamps and bayous in Louisiana in order to reach Baton Rouge, where he has heard the Union Army is stationed.

Peter is inspired by a real person who was known as “Whipped Peter” because of the famous photograph showing his scarred back, which had been so mutilated by whipping that it sent shockwaves around the country at the time.

Emancipation starts off like most other slave dramas and it is very difficult to watch men being beaten, whipped, branded, and so much more. The early scenes are upsetting, gut-wrenching, and gruelling.

But once Peter escapes, it becomes a different film altogether – it stops being a slave drama and more of an action-adventure because Peter and his friends have so many obstacles to overcome along the way, all with Fassel and his bloodthirsty hounds on their tail.

Peter has to come up with clever ways to evade capture and survive the treacherous environment.

And if that wasn’t enough, the film switches genres again in the third act. Peter signs up for the Union Army to help fight the Confederacy and we end up in a war movie thanks to a full-blown Civil War battle.

Fuqua also makes some curious visual choices. The picture is basically in monochrome, although there are pops of colour here and there, particularly for fire, blood, and greenery.

The reasoning behind this isn’t obvious and it can be jarring at times to see colour when your eyes have become used to black and white.

Smith, fresh from winning the Best Actor Oscar for King Richard, puts in another awards-worthy performance as the determined, resilient Peter, who will stop at nothing to be reunited with his family. He carries the movie on his own with very little dialogue.

Emancipation is not your average slave drama – Fuqua makes some odd narrative and visual decisions but it remains a poignant and powerful film.