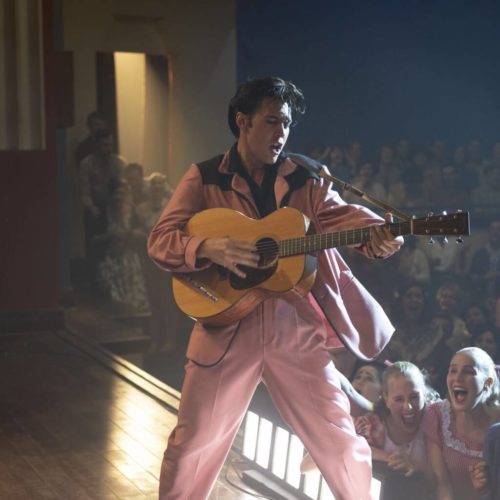 Verdict: Austin Butler is a surefire bet for an Oscar nomination for his electrifying portrayal of Elvis in this heavily stylised biopic

Given he was not well-known beforehand, Austin Butler was an unexpected choice to play Elvis Presley in Baz Luhrmann’s biopic – but you’ll understand exactly why he was cast when you see the film.

Elvis tells the story of the music legend, but is surprisingly told the eyes of his shady manager Colonel Tom Parker (Tom Hanks).

Parker guides us through their story – from him discovering Elvis and propelling his career, their disagreements during the 1968 comeback TV special and Elvis’ Las Vegas years.

The first half of this film moves a mile a minute and doesn’t really give the viewer a moment to settle into it.

It takes a scattershot approach to Elvis’ story so we only get a quick, surface-level idea of him in the early stages rather than the in-depth look we might have been expecting.

Thankfully, we finally get to know Elvis better when he starts to rebel against Parker’s ideas for his career.

The film really slows down for the TV special and the Vegas years, the latter of which gets the most screentime.

This is a wise decision because it shows Elvis’ increasing dependence on pills, the breakdown of his marriage to Priscilla (Olivia DeJonge) and Parker making shady deals behind his back.

From the TV special until the end, the film loses Luhrmann’s maximalist flair and become like a conventional biopic – because he finally lets matters breathe and the story do the talking.

However, its pacing sometimes feels too slow – perhaps because it was so fast before – and you start to feel the 2 hour 39 minute runtime.

Butler is a surefire bet for an Oscar nomination for his portrayal of Elvis. He is outstanding.

There is one moment when the film transitions between him and the real Elvis and you could barely tell the difference.

Although he’s not a dead ringer for the King, both his speaking and singing were terrific and he had Elvis’ pelvis-wiggling onstage moves spot-on.

The make-up and costume teams also deserve a huge shout out for replicating specific performance looks so well.

Hanks doesn’t come in for criticism very often but he was sadly the weakest link in the film and felt miscast.

He gave Parker – who illegally emigrated to America from The Netherlands aged 20 – the most bizarre accent, and between the voice and the fatsuit, it was hard to take him seriously, despite his character being the absolute worst.

In a sea of conventional celebrity biopics, Elvis is a breath of fresh air and one that stands out from the crowd.

Not all of Luhrmann’s risks – like using modern music despite the period setting – pay off, but the film felt exciting more often than not.