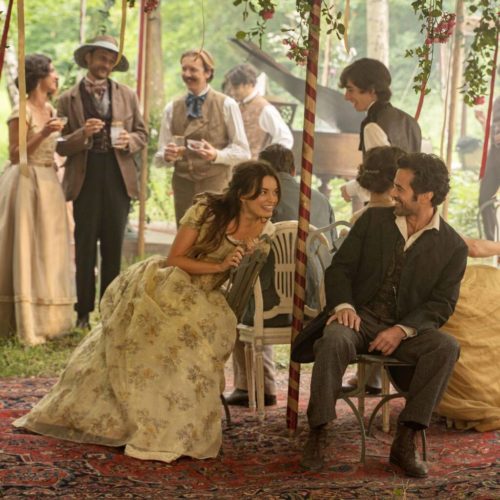 Verdict: Eiffel focuses on a fictional romance between Gustave Eiffel and Adrienne when the true story of the tower's construction is more interesting

Eiffel Tower engineer Gustave Eiffel meets a mysterious woman from his past in this work of historical fiction.

After breaking through with the English-language TV show Sex Education, people may forget that Emma Mackey is both French and English.

Eiffel, directed by Martin Bourboulon, will certainly remind people of her background.

One day in the late 1880s, she is introduced to Gustave Eiffel (Romain Duris), whose company is constructing the Eiffel Tower in Paris, and it becomes clear from their charged reunion that they’ve not only met before but there is a lot of history between them.

Through a series of flashbacks to the 1860s, we learn what happened between the engineer and the imagined love of his life.

Eiffel is not a biographical drama but a work of historical fiction.

The construction of the tower is largely based on fact but Eiffel’s story with Adrienne is entirely made up.

It’s a shame the film dedicates so much time to the fictional romance because the true account of the commission, design and construction of the tower is far more interesting and worthwhile.

Eiffel faced a lot of obstacles – such as striking workers, public controversy and financial problems – to get his tower made and that was a more compelling story.

The romance storyline isn’t bad or even boring but it isn’t what makes the film worth a watch.

That being said, it was still intriguing learning what happened between Eiffel and Adrienne from 1860 to the late 1880s and the love triangle aspect delivers plenty of drama. It is a little cheesy and contrived at the end though.

The chemistry between Duris and Mackey wasn’t particularly convincing and you only got a few glimpses of their initial fling so it didn’t do enough to make viewers invest in the fictional romance.

Duris portrays Eiffel as a very serious and stressed man and Mackey’s Adrienne is young, seductive, and of higher standing.

Unfortunately, the movie doesn’t have a big enough budget to really show the tower’s construction in all its glory, although Bourboulon does well to depict the earlier stages of the process despite the clear money constraints.

Eiffel follows in the footsteps of films that mix historical fact with fiction, such as Titanic and Ammonite.

Perhaps it would have been better off ditching the fiction and being a straightforward biopic of Eiffel.

In cinemas from Friday 12th August.