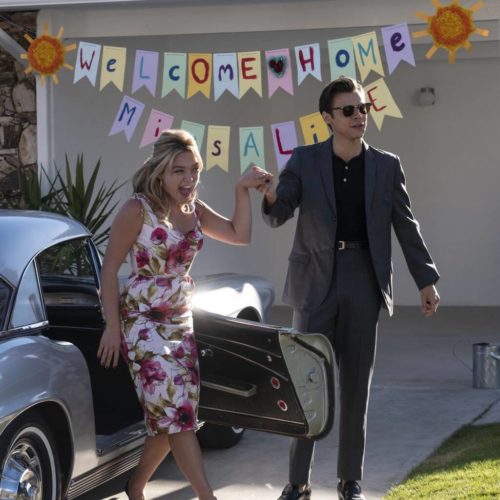 In the movie, he plays Jack, who lives in Victory, a town in 1950s Palm Springs, with his wife Alice, played by Florence Pugh. Every day, he and all the men in town go to work at the mysterious Victory Project while the wives stay home and cook, clean, and make themselves look fabulous for the next event.

The cracks start to show when Alice begins to question the work the men are doing for the Victory Project. She becomes convinced that nothing is as it seems in Victory – but is she losing her mind or seeing the community for what it really is?

Thanks to the stunning cinematography, production design, hair, make-up and costumes, Wilde has created a perfect, idyllic utopia in Victory. The town has an eerie edge because you can sense that something isn’t quite right. You can’t figure it out and you’re with Alice every step of the way as she tries to get to the bottom of it.

Wilde slowly ramps up the unsettling feeling as Alice descends further and further into madness and the story is very compelling because you just can’t wait to get some answers.

Unfortunately, the pace is slightly too slow so you really have to be patient. Also, you probably won’t receive all the answers you need to make the ending feel truly satisfying.

There have been “style over substance” criticisms aimed at this film but that isn’t the case – it is certainly stylish but there is enough story to get invested in, even if it unfolds a bit too slowly.

Naturally, given this is Styles’ biggest role yet, many are curious about the music star’s skills. He isn’t terrible at all – he is fine – but he pales in comparison to the force that is Pugh, and unfortunately for him, the vast majority of his scenes are with her.

She has this innate ability to access an impressive depth of emotion and vulnerability at the drop of a hat whereas it doesn’t come as easy to him, and so, he lacks her level of believability. Pugh became Alice, whereas Styles acted like Jack.

Out of their supporting cast, the biggest standouts were Pine as Victory’s cult-style leader Frank, who is attractive, charming, and sinister in a very subtle way. Mess with him at your peril.

There is also Wilde herself as Jack and Alice’s next-door neighbour Bunny. She is a fabulous gossip with a cigarette and martini almost permanently in hand and is the most comedic member of the cast.

Given the gossip surrounding the movie, it’s a shame it isn’t a total smash hit. It’s good, but it could have been great if improvements were made to the pacing and the third-act explanation.

In cinemas from Friday 23rd September.