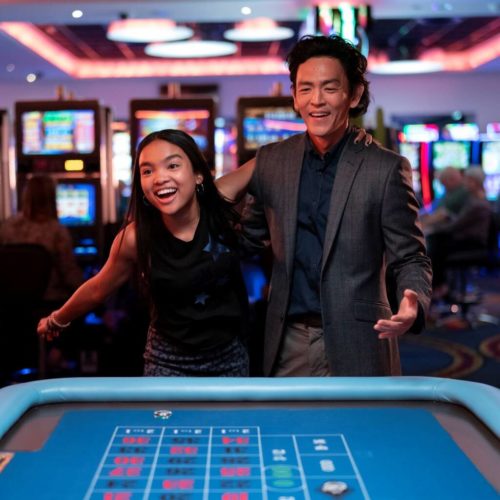 Verdict: Don't Make Me Go is a sweet and heartfelt father-daughter movie with a terrific script and lead performances

John Cho and Mia Isaac take a father-daughter road trip to rebuild their fraught relationship in this moving drama.

If you like a good old-fashioned road trip movie, then Don’t Make Me Go is one for you.

After he discovers he has a fatal brain tumour, he takes Wally on a road trip from California to Louisiana so he can go to his high school reunion – where he hopes to run into her mother, who left them just after Wally was born.

This is a sweet and heartfelt father-daughter movie with a terrific script and two lead performances.

The screenplay contains some perfectly written conversations and confrontations and it cleverly reveals new and interesting facts about Max’s past as the film progresses and he starts letting his daughter in.

Plus, we also get to see Cho sing in a karaoke scene!

At the beginning of the film, Max and Wally are stuck in a rut and are so emotionally distant from one another.

He is so uptight, while Wally is in her rebellious phase, so they keep butting heads.

The road trip helps them mend their relationship and gives Max the opportunity to show his daughter who he is outside of being her dad.

You might think the ending of this movie is predictable from the setup but rest assured that it is not. A twist comes from out of nowhere and changes everything.

This unexpected new direction will likely be quite divisive – it might move some people and anger others.

Cho has always been a solid performer and he is excellent as the stressed-out dad with the weight of the world on his shoulders.

He wants to rebuild their relationship and prepare her for life without him all while having silly fun on the road trip.

Newcomer Isaac holds her own against her onscreen dad and her emotional performance in the big confrontation scene is pitched perfectly.

The only part that didn’t feel quite right was Kaya Scodelario as Max’s love interest Annie.

She wasn’t convincing as the character and their chemistry wasn’t believable – perhaps that’s because of the 20-year age gap between them.

Putting the divisive ending to one side, Don’t Make Me Go is a likeable and well-written road trip movie that’s worth checking out.