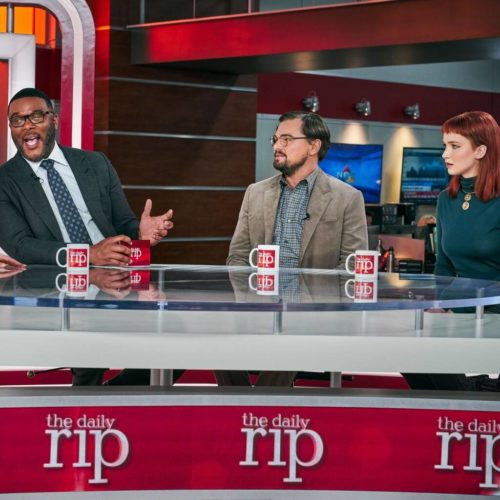 Verdict: Adam McKay takes on a bit too much with his satire so it achieves mixed results but it's fun watching A-list stars sinking their teeth into the material

Jennifer Lawrence and Leonardo DiCaprio play two astronomers who discover a comet is heading towards Earth.

Adam McKay has used his movies to poke fun at topics such as politics and the housing market in the past, and with his new film, Don’t Look Up, he tries to take aim at everything.

In this satire, PhD candidate Kate Dibiasky (Jennifer Lawrence) discovers a comet and reports it to her professor, Randall Mindy (Leonardo DiCaprio), and together they learn it is on a collision course with Earth and will wipe out mankind in just over six months.

They take this catastrophic news to U.S. President Janie Orlean (Meryl Streep) and her Chief of Staff, son Jason (Jonah Hill). But they don’t take the matter seriously and decide to sit on this information as the mid-term elections are coming up, so the two astronomers take matters into their hands and go to the press – with mixed results.

McKay uses his movie to take a cynical and bleak look at the times we’re in, with him taking aim at the state of politics, media, celebrity culture, social media, technology – among others – and you can draw parallels between the story and the climate change crisis, the political divide in America, and even Covid-19 conspiracy theories.

His attempt to satirise too much at once means his film takes a scattershot approach and has mixed results. The jokes and barbs don’t always land and his writing is rather heavy-handed. Plus, the editing is bizarre, there are a lot of rapid-fire cuts near the end, and sometimes random imagery appears between scenes with no obvious explanation.

What you make of Don’t Look Up will entirely depend on your sense of humour, your political sensibility, and if you understand and/or agree with what McKay is trying to say. This film has really divided audiences, much like McKay’s satires The Big Short and Vice, and that’s not surprising, since he makes big, bold statements that won’t suit everybody.

It’s not a non-stop comedy but it is very amusing and there are some laugh-out-loud moments, largely thanks to Hill, who is hilarious as the effeminate son enjoying the perks of nepotism without any real idea of how to do his job.

Lawrence, returning from an acting hiatus, has always been good at playing angry, frustrated characters with a chip on their shoulder and that’s exactly who Dibiasky is so she’s perfectly suited to the role. Her co-lead DiCaprio is rarely seen as an everyman character so it was refreshing to see him as an average university professor thrust into the spotlight without media training. In one scene, Mindy explodes with anger on live TV and his public meltdown is terrific.

Streep can always be relied upon to deliver the goods and that’s no different here. She thankfully doesn’t play President Orlean like the selfish villain she is, similar to Mark Rylance as tech billionaire Peter Isherwell, who is technically a bad guy but is played like a quirky enigma.

The cast McKay has assembled for this is ridiculous – it also stars Rob Morgan as the astronomers’ ally, Cate Blanchett and Tyler Perry as co-anchors of The Daily Rip, Ariana Grande and Kid Cudi as a celebrity couple, and Timothee Chalamet as some dude named Yule.

Despite all the big names, it’s unlikely Don’t Look Up will get very far this awards season because it is so divisive. There’s only one thing to do with a Marmite film – check it out! Make sure you stay until the end of the credits.

In selected cinemas from Friday 10th December and Netflix from 24th December.