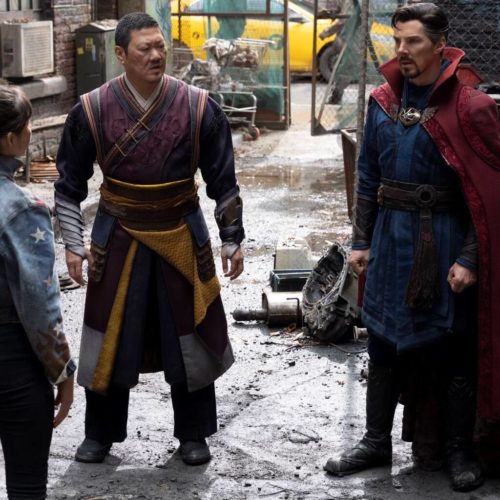 Doctor Strange in the Multiverse of Madness

Verdict: This horror-influenced sequel is weakened by its clunky script and nowhere near as exciting as it should have been

Following on from his appearance in Spider-Man: No Way Home, Doctor Strange is the latest Marvel star to get another standalone movie.

In Sam Raimi’s film, the follow-up to 2016’s Doctor Strange, sorcerer Stephen Strange (Benedict Cumberbatch) has an encounter with America Chavez (Xochitl Gomez), a teenager who has the power to jump through multiverses.

Naturally, having that precious power makes her a target, so Strange and Wong (Benedict Wong) help save America from a dark force that wants to kill her in order to acquire her ability.

Although that’s the redacted version of the plot, there isn’t much more to it than that – the story is extremely simple and wafer-thin.

It was hard to care for or get invested in the narrative because it didn’t feel anything special or particularly exciting.

Even the cameos – of which there are several – aren’t as fun as No Way Home and the actors are lumbered with dull, uninspired dialogue.

The script is an issue throughout as writer Michael Waldron seemingly got tangled up in knots trying to bring threads from No Way Home, Doctor Strange, and TV’s WandaVision together, find a reason for the cameos, set up future films, and create a substantial story that makes the sequel feel worthwhile.

The dialogue felt clunky and the pacing was off, and in some moments, it felt like the post-production had been rushed, with the CGI not up to standard in certain scenes.

There are some positives though – Raimi, known for horror films like The Evil Dead and Drag Me To Hell, has brought his horror influence to the film and it is quite scary and creepy in places.

There are violent and gory moments – and while these have been sanitised for the sake of a family audience – it is probably not suitable for young children.

This is the most frightening MCU film to date and that is a good thing.

The darker tone and horror elements made the film feel different, fresh, and more subversive than your typical superhero outing.

The movie may have Strange’s name in the title but it’s Wanda Maximoff/Scarlet Witch (Elizabeth Olsen) who steals the show.

Her storyline – which shall not be spoiled – is problematic but her performance is impressive.

Given the issues with the script and the lack of nuance her character is given, it’s commendable that she managed to give a layered, emotional performance.

Newcomer Gomez is another great addition – she is appealing, likeable, and the most normal among a sea of sorcerers and witches.

Following the excitement of No Way Home, Doctor Strange in the Multiverse of Madness feels underwhelming.

Let’s do hope Taika Waititi’s Thor: Love and Thunder turns it around soon!

In cinemas from Thursday 5th May.