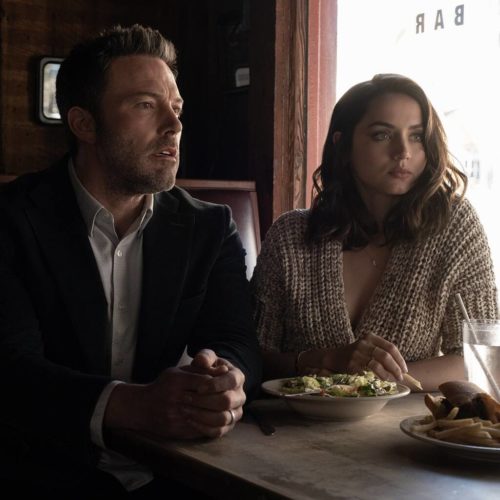 The film, based on the Patricia Highsmith novel of the same name, tells the story of Vic and Melinda Van Allen (Ben Affleck and Ana de Armas), a wealthy tech inventor and his young wife.

They are stuck in a joyless, loveless marriage but instead of calling it quits, they have come up with an arrangement.

Vic allows Melinda to take up lovers, who she brazenly shows off in front of her husband and their friends.

He continually insists that he is completely fine with this set-up – but his actions would suggest otherwise.

Not an awful lot happens and it doesn’t have as many twists and turns as a thriller should, perhaps because it omits the big final twist in Highsmith’s novel so the final act feels like it’s missing something.

However, it was still fascinating and engrossing watching the shifting power dynamics within this extremely unconventional marriage and observing Vic and Melinda’s continuous fight for control.

The film is a terrific showcase for de Armas, who keeps showing us more of what she’s capable of.

She has the showier role as the one with the insatiable appetite for sex, intimacy and passion, things she no longer gets from her husband so tries to find elsewhere. She has a seductive and alluring screen presence.

Melinda’s biggest reason for getting lovers and dangling them in front of Vic is to try to get his attention and see if she can make him feel something.

But Vic wears this mask of cool detachment and is totally emotionless on the surface, but that’s not a true reflection of what he feels deep down.

With this character, Affleck doesn’t have to do much work at all to come off as odd and slightly menacing.

Together, the actors convincingly portray two people who once loved – but now can’t stand the sight of – each other.

They are very twisted and you can’t help but feel sorry for their daughter Trixie (Grace Jenkins) being caught up in their mind games.

Lyne hasn’t made a movie since 2002’s Unfaithful and he hasn’t lost his touch. Deep Water certainly isn’t up to the standard of his earlier work but it’s still a riveting watch.