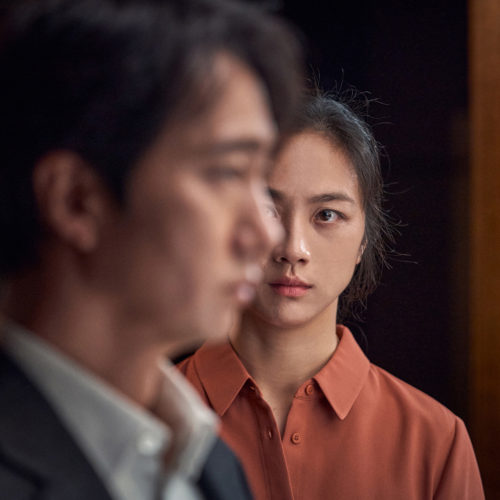 Decision follows an insomniac detective Hae-Jun, who becomes transfixed by Seo-Rae, the alluring prime suspect of a cliff-side murder case.

It’s a visionary work of neo-noir that spotlights the obsessive-romantic undertones of the detective genre and mocks the conceit of mystery.

There is no whodunnit. To investigate is simply to know another. The protagonist knows our beautiful stranger is guilty, he just refuses to believe it.

It lays bare what noir investigation actually is, fanatical obsession, and it does it with sickening clarity.

As a director, Park is at his formalist peak. While many legacy directors are only becoming more self-indulgent this deep into their respective careers (Tarantino, Wes Anderson, Scorsese, Wright), Decision is refreshingly succinct, but no less stylish.

Park’s camera weaves through impossible space, surprises you with interesting POVs, slides perfectly from one modular space to another, and strings it together with immaculate rhythm.

The sound work is unparalleled, capturing subtleties I’m not used to hearing. Tiny gestures that other films would ignore, have a real presence in the mix, and the result is a deeply satisfyingly tactile experience. Breath on a water droplet, three bouncing dots on a messaging app, the crunch of a pomegranate.

It’s hard to explain if you haven’t seen it, but Decision feels tangibly neat. Every sequence is worthy of an r/oddlysatisfying post.

It flows so effortlessly it’s hard to tell where scenes start and end – flashy, yet unpretentious, showing only what is interesting and cutting everything else.

Scenes that would take minutes in other films are captured in seconds. It’s extremely delicate, consumed by small details, yet flowing effortlessly.

Decision is a marvel of engineering, striking an impossible balance between lavish form and economised story. It’s ornate, but it feels delightfully simple.

For these characters, it’s a fact of reality, as natural as drawing breath. It happens all too easily, as if it’s an expectation.

It’s as much about becoming your subject, of sharing a life with them, as it is about observing them. It’s romantic, companionate, as much as it is obsessive.

There’s a wonderful nuance to the spiralling games of performance and spectatorship played by our leads, and the tension they share is palpable, compellingly ugly.

Park expresses these ideas with fantastic visual ambition, really pushing the motifs of earth and water, eyes and seeing, imitation, the ever-presence of technology. Phones are essential to the film’s language.

Without spoiling anything, they explore a medium which is the message element of the relationship, bridging the language barrier between our Korean protagonist and Chinese love-interest, while generating a malevolent permanence to our character’s words.

Where many directors have struggled to meld the written world of the phone with the visual dialect of film, Park has some genius ways of integrating the two. Shots framed from inside the protagonist’s phone are an especially nice touch.

I have much left to unpack on repeat viewings, but I’m left with the overwhelming feeling this might be one of Park’s best movies.

It’s so utterly rich in everything it attempts, so imaginative, so effortlessly funny, so casually crushing.

Few films have left me with the profoundly defeating sense that the wanting is always better than the having.

In cinemas from Friday 21st October.