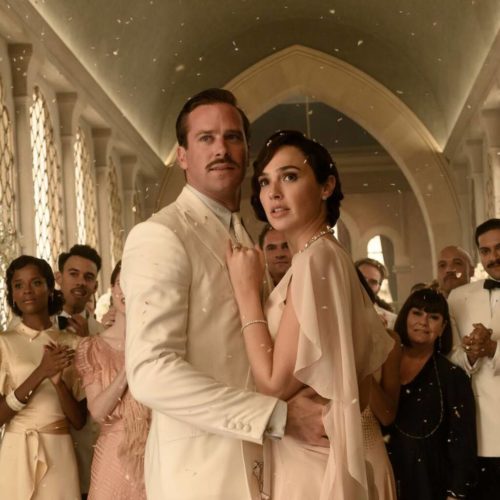 Death on the Nile

Verdict: This whodunnit is littered with issues, from bad CGI, wooden dialogue to the elephant in the room, Armie Hammer.

Famed Belgian detective Hercule Poirot helps solve the murder of a wedding party guest during a trip down the Nile.

Kenneth Branagh’s latest Agatha Christie movie adaptation has been delayed so many times that many wondered if it would ever be released – but it’s finally made it!

Following on from 2017’s Murder on the Orient Express, the latest whodunnit once again follows renowned Belgian detective Hercule Poirot (Branagh) solving a crime, but this time the action takes place on a steamboat on the Nile rather than a train.

Concerned about the sinister presence of Simon’s ex-fiancée and stalker Jacqueline De Bellefort (Emma Mackey), they move the celebrations onto a steamboat on the Nile.

When one of the guests onboard the Karnak is murdered, Poirot must eliminate the suspects to figure out who committed the crime.

Branagh is currently riding high on the awards season success of his autobiographical film Belfast, and it seems unfortunate that this murder mystery has been released around the same time to muddy the waters.

The film is littered with issues, the most obvious being that the leading man – Hammer – fell from grace early last year amid allegations of sexual abuse, which he has denied.

Casting that aside, Death on the Nile takes forever to get going, moves very slowly, and then speeds up right at the end so the conclusion feels anti-climactic.

The scene in which Poirot makes his accusations was fascinating but what happens after is bizarre, awkward, and you come away feeling underwhelmed.

If you’re expecting gorgeous Egyptian vistas, then you might be disappointed as the actors filmed their scenes in a studio.

Some of the establishing landscape shots may have been on-location but you can tell the stars are stood in front of a green screen too often in this film and it’s a big shame.

The screenplay is also problematic as it is full of wooden or cringe-inducing dialogue that stops the actors from doing their job well.

This was most evident with Annette Bening as Bouc’s mother as she frequently oversold her lines.

Elsewhere in the cast, Gadot and Hammer felt bland and had very little chemistry and Russell Brand seemed like an odd casting choice for a straight-faced doctor.

Former comedy duo Dawn French and Jennifer Saunders were reunited at long last but frustratingly don’t get to do anything funny.

Sex Education star Mackey, making her first studio film, is easily one of the highlights of the piece, bringing real flair and scorned ex energy to Jacqueline.

She is joined on the good list by Letitia Wright and Sophie Okonedo as Rosalie and Salome Otterbourne – the latter is a cool jazz singer with a southern American drawl.

But the person who comes out of this the best is Branagh himself (strictly in the acting sense). Poirot was the only one who added some comedy and levity to the mix and provided some much-needed laugh-out-loud moments.

Death on the Nile is too long, too slow, and too stale to be a success. Let’s hope it doesn’t derail Branagh’s Oscars chances.