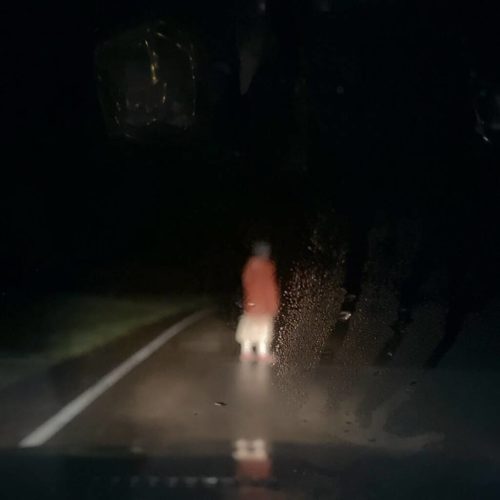 Musician Annie Hardy has the night from hell when she offers an elderly woman a ride in her car in this horror.

Rob Savage terrified fans during the pandemic with his lockdown Zoom-call horror Host and has now made his follow-up, Dashcam.

The film, which is almost entirely shot on iPhones, follows Annie Hardy (Hardy playing a fictionalised version of herself), the host of BandCar, a livestreamed show in which she freestyles raps while driving around. Fed up of the lockdown in America, she breaks travel restrictions to fly to England to see her old bandmate Stretch (Amer Chadha-Patel).

Continuing to livestream most of her life while in the U.K., the viewers follow Annie as she endures a night from hell after she picks up a strange elderly woman in her car and offers her a ride home.

This supernatural horror is nowhere near as clever or scary as Host. That film had solid characters, a tight plot and decent dialogue whereas Dashcam has none of those things. It all feels very slapdash and haphazard and the story and characters are very flimsy.

It is still frightening in places – usually when it feels like scares are about to happen – but Savage has mostly gone for gore and lots of blood instead of jump scares this time around.

While the anticipation of a scare is effective, the actual horrifying moment isn’t because of the chaotic and shaky camera movement. When a character is running or being attacked, for example, you can’t really tell what’s going on as the camera is either jumping up and down all over the place or the picture is too blurred.

Understandably, the characters are more concerned with their survival than video quality in those moments so the movement is realistic but it’s also incredibly disorientating and unpleasant to watch.

Another big problem with Dashcam is the lead character. The audience is supposed to have a protagonist whose survival they care about but that isn’t the case with Annie because she’s so annoying.

She is anti-mask, anti-vaccine and doesn’t follow lockdown protocols, she is awful to Stretch and his girlfriend, and her show mostly revolves around her making vulgar raps about sex and genitalia. It is funny at the very start but gets repetitive soon enough, although some of the comments that appear on-screen from BandCar viewers can be amusing.

Dashcam had a solid concept and it was interesting seeing Savage translate the skills he honed on Host to this story, but it wasn’t executed very well and resulted in a stressful viewing experience.

In cinemas from Friday 3rd June.