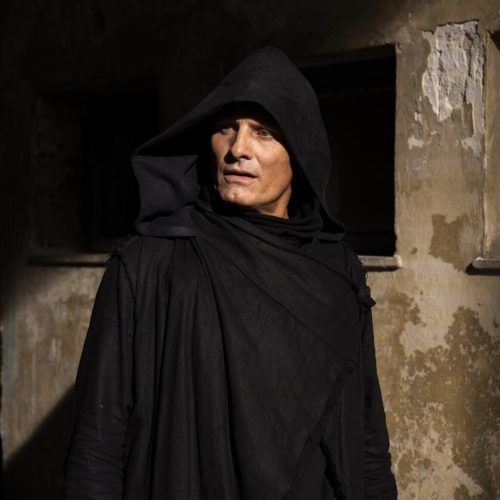 Crimes of the Future

Verdict: David Cronenberg's body horror is nowhere near as shocking and gruesome as the hype would suggest. In fact, it's quite boring!

Viggo Mortensen plays a performance artist who removes his unnecessary organs in front of an audience in David Cronenberg’s horror.

Before Crimes of the Future premiered in Cannes, the hype surrounding David Cronenberg’s body horror suggested that it was so graphic and gory that some people might not be able to cope with it. So, how bad is it?

First of all, let’s set the scene – Crimes of the Future is set in a dystopian future where people can no longer feel pain and “surgery is the new sex”.

Saul Tenser (Viggo Mortensen), who is able to grow new, unnecessary organs, removes them in public as a form of performance art with the help of his partner Caprice (Léa Seydoux).

Given the premise, it’s no spoiler to say that there are plenty of surgery scenes in this movie.

If you can’t stomach operation scenes or are squeamish with any level of gore, then this movie is definitely not for you.

However, the film isn’t as gruesome and brutal as the hype would suggest.

If you have seen body horror films before, or even Cronenberg’s earlier work, then you have probably seen way worse already and are well prepared for what’s to come in Crimes of the Future.

Given such a unique and shocking concept, you would expect a thrilling movie, but this is unfortunately very slow and dull, with a weak screenplay filled with boring exposition.

It is baffling how such a creative, fearless premise could produce such an unengaging story and bland lead performance from Mortensen.

Cronenberg has a lot he wants to say about society with his film and presents plenty of interesting ideas – but he doesn’t follow them all through to their full potential. He only remembers to flesh one out to a satisfying conclusion.

This is what makes the ending so surprising. You won’t expect it to end where it does because there is so much left to be explained and answered.

It’ll certainly leave you thinking about it long after you’ve left the cinema though.

Kristen Stewart, who plays Timlin, a member of the National Organ Registry, is the most interesting of the three leads.

Her character is very odd and speaks in an unusual and unexpected manner. Seydoux is as alluring and captivating as always, but Mortensen isn’t given enough to really sink his teeth into.

The hype and headlines surrounding Crimes of the Future made it seem like viewers would need to brace themselves for an onslaught of blood and guts but instead, they need to be prepared for a disappointingly dull movie that doesn’t capitalise on its potential.