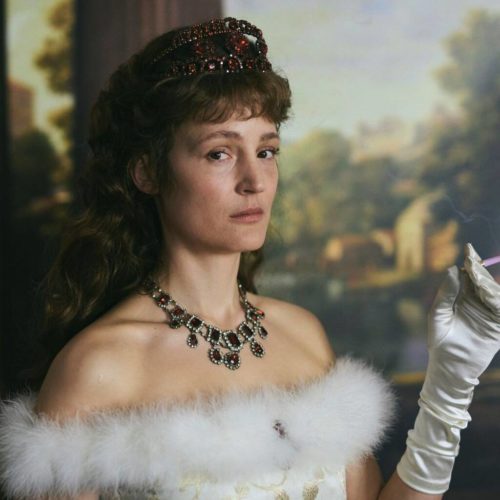 Verdict: Vicky Krieps is on career-best form as the melancholic role in this dull and unengaging period drama

This anachronistic period movie is set in the late 1870s and tells the story of Empress Elisabeth of Austria (Krieps), the 40-year-old rebellious wife of Emperor Franz Joseph I (Florian Teichtmeister), who she tries to spend as little time with as possible.

She is restless, impulsive, and thoroughly depressed and rebels against what is expected of her whenever she can.

Although Empress Elisabeth is a real person, this should not be treated like a biopic because Kreutzer has taken some liberties with the truth.

Her personality is largely factual – she barely slept, wore extremely tight corsets to keep her waist astonishingly thin, ate barely anything, and tried to get out of her duties where possible.

However, her actions are a work of fiction, especially as it nears the end.

The trailer for Corsage makes it seems like a whimsical and comedic period drama in a similar vein to Marie Antoinette and The Favourite.

It has moments of irreverence and cheeky rebellion, but it’s far more serious than the marketing leads you to believe.

It’s quite slow and dull and nowhere near as fun as it seemed, plus there is barely any plot to hang onto – we basically just watch Elisabeth test the confines of her gilded cage and do what she’s got to do to feel some happiness within her expected role.

The film becomes slightly more amusing towards the end when the royal comes up with a doppelganger plot but it’s a case of too little too late by that point.

Krieps is back on career-best form in Corsage and she perfectly channels the nuances of Elisabeth’s melancholy, disdain for society life, and her provocative, rebellious attitude.

However, Corsage will not work for everybody. While some people have raved about the “romp”, others may find it dull, unengaging, and devoid of much fun.

In cinemas from Monday 26th December.