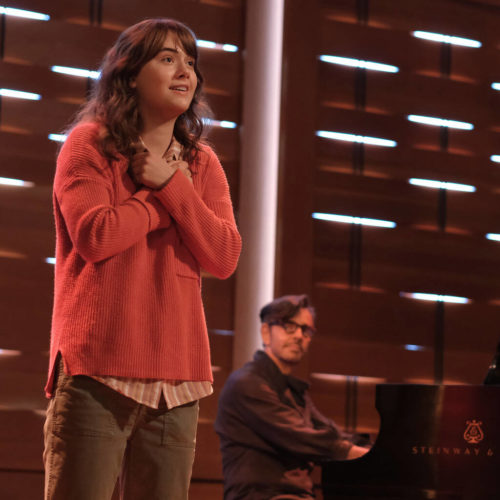 Verdict: CODA is a delightful crowd-pleaser that'll leave you with a warm fuzzy feeling inside.

Emilia Jones plays the only hearing member of her family in this coming-of-age tearjerker.

CODA was one of the breakout hits of this year’s Sundance Film Festival, landing four awards and being sold to Apple for a festival record of $25 million.

This coming-of-age drama follows Ruby Rossi (Emilia Jones), a child of deaf adults (CODA for short), the only hearing member of her family.

Her parents Jackie (Marlee Matlin) and Frank (Troy Kotsur) and older brother Leo (Daniel Durant) have come to rely on her help with their fishing business, but she wants to pursue her passion for singing by auditioning for Berklee College of Music.

Ruby becomes torn between her family and helping them launch their new venture and doing what she loves.

CODA, a remake of the French film La Famille Bélier, is such a delightful, feel-good flick. It will make you laugh loads, smile often, and then do a big cry at the end.

It’s not a tearjerker in a Titanic sense; it’s one that makes you emotional because the story is so lovely and Jones’ singing is stunning. Kudos to you if you can reach the end without having a weep.

In addition to her gorgeous singing voice, Jones is a captivating and likeable lead who convinces as a girl burdened by her family and exhausted by being their “free interpreter”.

It is rare to see deaf characters in film being given so much depth and personality, let alone a terrific sense of humour.

Durant rounds out the fantastic foursome as the angsty brother who resents Ruby for being seen as the saviour of the family, a role that he believes should be his.

Elsewhere within the cast, Eugenio Derbez excels as Ruby’s nurturing but straight-talking choirmaster Bernardo, who guides her towards the next phase of her life, while Ferdia Walsh-Peelo gets to show off his lovely singing voice as Ruby’s duet partner and love interest Miles.

CODA is an uplifting crowd-pleaser that’ll leave you with a warm fuzzy feeling inside.