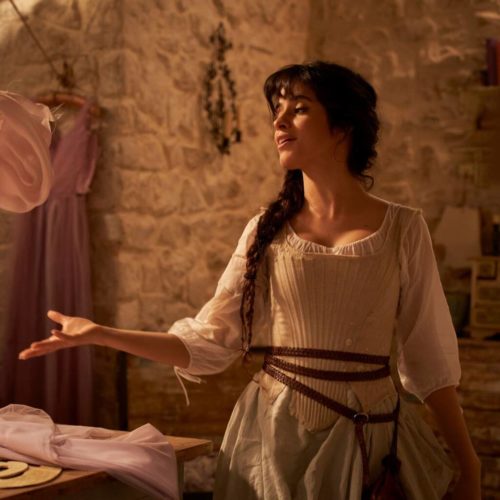 Camila Cabello makes her acting debut in this movie musical take on the classic Cinderella tale.

The classic fairy tale Cinderella has been adapted for the screen many times over the years and now the familiar story is back once again.

We all know the drill – Cinderella, an orphan who lives with her evil stepmother and stepsisters, is transformed into a beauty thanks to a fairy godmother and goes to the ball, where she meets her Prince but has to flee before the clock strikes midnight so he has to track her down using her discarded glass slipper.

This Cinderella, starring singer Camila Cabello in her acting debut, follows the broad strokes of the fairy tale but has been given a big feminist update – she is driven by her ambition to launch a fashion design career rather than finding a husband.

Given that Kenneth Branagh’s live-action Disney remake of Cinderella only came out in 2015, it feels too soon to have this classic story told once again, even with the added musical numbers and modernisations.

And it’s certainly not writer/director Kay Cannon’s strongest work, with the project failing to reach the heights of Pitch Perfect and Blockers.

In fact, Cinderella often felt like a pantomime production rather than a legitimate movie, and although there is plenty of fun and enjoyable moments, it is extremely cringeworthy and hard to take seriously.

Perhaps inspired by her 2017 Netflix series Girlboss, Cannon seemingly had the best of intentions with her revisionist feminist take on the frequently-told story but it comes off as a token gesture which at one point suggests that you can’t be a female entrepreneur and marry the man of your dreams, it has to be an either/or situation. Yikes!

With the exception of two original songs, Cinderella is mostly compromised of an eclectic mix of cover tracks ranging from Jennifer Lopez’s Let’s Get Loud, The White Stripes’ Seven Nation Army, Queen’s Somebody to Love to Madonna’s Material Girl.

The musical numbers are a mixed bag – some were brought to life well, were entertaining to watch, and worked within the context of the story, while others didn’t quite work and felt quite awkward when they began.

Despite these issues, Cabello still does well in her acting debut; she has charm, fun comic timing, and a gorgeous singing voice. Idina Menzel was perfectly cast as her stepmother Vivian – she gets great musical numbers but her characterisation is all over the place – and there should have been more of Billy Porter as the Fab G, aka fairy godmother, he was glorious!

And that’s not all – Minnie Driver was excellent as the Prince’s mother Beatrice – she puts King Rowan (Pierce Brosnan) in his place, has a sassy attitude, and solid singing voice, while Brosnan threw himself into the tone of the production and leans fully into the silliness.

This promises to be a film that creates a wide critic and audience divide – while the critics have savaged this film, it’ll more likely appeal to the masses as it’s a feel-good, well-intentioned, and harmless bit of fun.