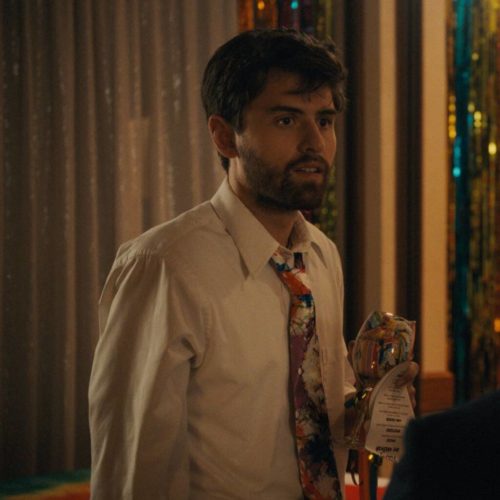 Indie filmmaker Cooper Raiff has established himself as a director to watch out for with his second project Cha Cha Real Smooth.

The comedy-drama, which he also wrote, produced and stars in, tells the story of Andrew (Raiff), a directionless 22-year-old who has just finished university and has no idea what to do next, so he moves back into his family home in New Jersey.

Unhappy with his job at fast food joint Meat Sticks, Andrew unexpectedly lands himself a new gig when he accompanies his brother David (Evan Assante) to a bar mitzvah party and encourages everyone to get up on the dancefloor.

All the parents of David’s classmates recruit Andrew to be the party-starter for their upcoming bar and bat mitzvahs.

At the parties, he befriends local mum Domino (Dakota Johnson) and her autistic daughter Lola (Vanessa Burghardt, in her debut movie role) and starts to form more of an idea about his future.

Most coming-of-age films focus on children or teenagers but Cha Cha Real Smooth certainly feels like it belongs in that genre as Andrew has a case of arrested development and acts like a big kid.

He truly needs to grow up, take responsibility for his actions and earn enough money to fly the nest for good.

Andrew and Domino are both flawed, messy characters who are more nuanced and complex than you might expect from a film like this.

The screenplay is amusing (but rarely laugh-out-loud funny), emotionally honest and well observed.

Raiff cements himself as a writer-director-star to watch with only his second feature.

His character is likeable and charismatic – despite being a total mess – so you root for him to figure it all out.

Johnson is impressive in her complicated and surprisingly emotional role as a mother and fiancée who wants security but is also scared of being committed to one person forever.

However, the actor who steals the show is newcomer Burghardt, who is on the autism spectrum in real life.

Characters with autism are rarely well-rounded on screen but Lola is three-dimensional and there is much more to her than her autism.

Cha Cha Real Smooth was the breakout sensation of Sundance, where it won the U.S. Dramatic Audience Award in January, and it’s clear to see why it won over festivalgoers.

It may be very likeable, but it isn’t as perfect as the hype would suggest and it’s not particularly memorable.