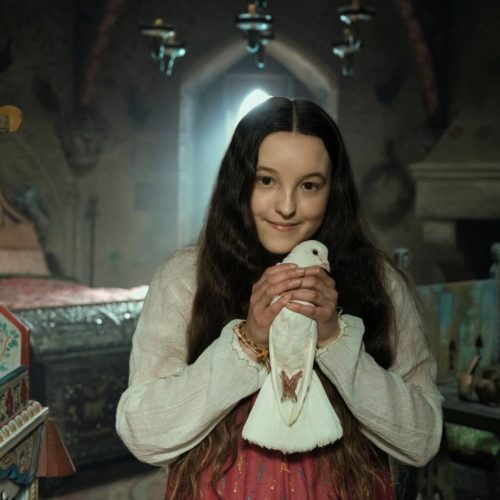 Verdict: While teenage girls will probably devour this movie, Catherine Called Birdy has a much wider appeal thanks to its cheeky tone.

Bella Ramsey plays a mischievous young lady who tries to deter potential suitors from proposing marriage in this coming-of-age comedy.

After breaking out with her 2010 movie Tiny Furniture, Lena Dunham took a long break from directing films and is finally back with two features.

First up is Catherine Called Birdy, a medieval comedy.

Written by Dunham based on Karen Cushman’s book of the same name, the film stars Bella Ramsey as Lady Catherine, aka Birdy, a 14-year-old living in Stonebridge, Lincoln in 1290.

Facing financial ruin, her father Lord Rollo (Andrew Scott) believes the best way to turn his family’s fortunes around is by marrying Birdy off to a wealthy man. However, Catherine is not much of a lady – she is mischievous and rebellious. Birdy has no intention of accepting a marriage proposal and makes it her mission to put off every man that comes her way.

Although the film is set in medieval times, it is a traditional coming-of-age story bearing the classic features – teenage angst, defying the parents, the horror of getting your first period, and developing crushes on older boys.

Dunham has impressively cultivated a witty, light-hearted tone throughout the film and packed her script full of amusing lines of dialogue.

Ramsey lives up to the challenge of playing the title character and carrying the movie. She makes the film much more watchable than it might have been without her because her Birdy is so cheeky and stroppy and her fight for independence in a patriarchal society is very relatable.

She shines despite being surrounded by a star-studded cast and is so much fun to watch as she creates her latest scheme and outsmarts her parents. Birdy is recounting her story while writing a diary and Ramsey’s intermittent narration and the onscreen facts about her friends, family, and suitors will put a smile on your face.

Scott delivers most of the laughs as the vain and greedy father who cares little for his only daughter, and thankfully, Birdy has the care and support of her nurse Morwenna (Lesley Sharp) and mother Lady Aislinn (Billie Piper).

Dunham has assembled plenty of other famous faces in this cast – including Joe Alwyn as Birdy’s kind and handsome Uncle George, Sophie Okonedo as his pragmatic love interest Ethelfritha, and Paul Kaye as Birdy’s most revolting suitor, Shaggy Beard.

While teenage girls will probably devour this movie, Catherine Called Birdy has a much wider appeal thanks to its cheeky tone and even cheekier lead actress.