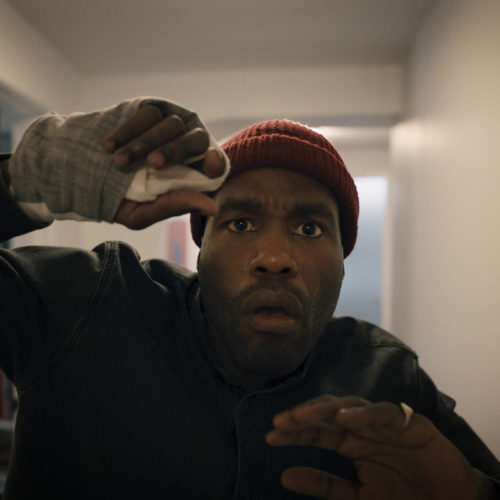 Verdict: Candyman doesn't fully work and is failed by its last 10-15 minutes, but otherwise it's an intriguing blend of creepy horror and social commentary.

Yahya Abdul-Mateen II plays a struggling artist who becomes dangerously obsessed with the urban legend of the Candyman.

The 1992 horror Candyman spawned two sequels – 1995’s Farewell to the Flesh and 1999’s Day of the Dead – but those instalments are forgotten about with Nia DaCosta’s new film, which serves as a direct sequel to the original.

The supernatural slasher horror follows Anthony McCoy (Yahya Abdul-Mateen II), a struggling artist who has just moved into a new gentrified development on the site of Cabrini Green – the neglected housing projects heavily featured in the first film – with his girlfriend, art curator Brianna (Teyonah Parris).

Following a random encounter with longtime Cabrini resident William (Colman Domingo), Anthony becomes obsessed with the urban legend of the Candyman, a hook-handed man who will kill you if you say his name in the mirror five times, and unwittingly opens a door to his troubled past.

Just like he did with Get Out and Us, Jordan Peele, who produced and co-wrote this movie, blends horror and social commentary on Candyman, with it particularly focusing on police brutality, the commonplace violence and death in Cabrini Green, and how the poor, predominantly Black neighbourhood was cut off and forgotten by the City of Chicago before becoming gentrified.

The sequel makes some interesting and unexpected connections to the original and builds upon the urban legend, honouring what came before but also bringing it bang up to date.

However, despite its best intentions, it doesn’t fully work. There are a lot of issues in the last 10-15 minutes. The themes weren’t handled well, they lacked nuance, and a certain character does an evil switch that doesn’t make sense or feel earned. It was confusing and leaves the viewer with many questions.

Candyman deserves a lot of praise for other aspects though. The cinematography is stunning and there were plenty of very cool and unexpected shots, such as mirrored cityscapes and seeing a killing through a dropped cosmetics mirror. DaCosta also employs incredible shadow puppets to depict the folklore surrounding Candyman.

There are some amazing lead performances too, with Abdul-Mateen giving an impressive turn as a man slowly descending into madness, and Parris holds her own as his solid, supportive girlfriend with a no-nonsense attitude.

If you’re hoping to get a straight-up horror with Candyman, you may be disappointed because there’s a lot more going on (probably too much). Like the original, it has sporadic scary moments but is mostly about the creepy and unsettling atmosphere, however, you might be pleased to know that there’s still plenty of blood, a dash of gore, and a few instances of grim body horror that’ll make you flinch.

Make sure you refresh your memory of the 1992 movie before watching this one as it’ll improve your experience a lot.