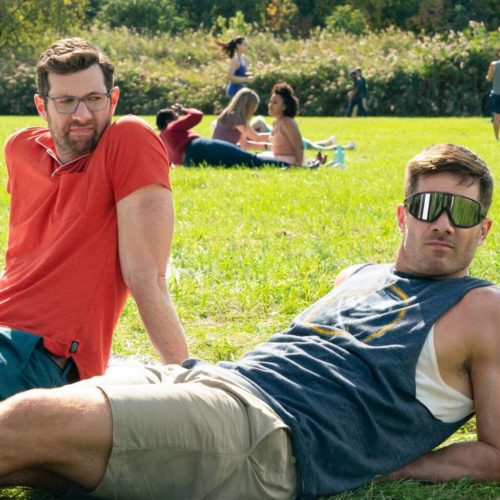 Verdict: Bros is the best romantic comedy of the year and probably one of the best movies of the year in general

Billy Eichner and Luke Macfarlane play two men who fear commitment but can’t stop hanging out with each other in this hilarious romcom.

Between Ticket to Paradise and Bros, it’s safe to say that the romantic comedy theatrical experience is back!

Bros, directed by Forgetting Sarah Marshall‘s Nicholas Stoller, stars Billy Eichner as Bobby, a podcast host and museum curator who prides himself on always being single and ready to mingle.

However, that changes when he meets Aaron Shepard (Luke Macfarlane) in a nightclub and starts to have feelings.

Even though he is adamant about staying relationship-free, neither of them can resist seeing each other more and more…

Bros is the first gay romantic comedy featuring an openly LGBTQ+ principal cast to be released by a studio.

It shouldn’t have taken that long but it’s more than worth the wait – it is fantastic and the best romcom of the year, if not one of the best films of the year.

The script, co-written by Eichner and Stoller, is packed full of jokes, one-liners and hilarious pop culture references that will have you laughing out loud constantly.

It is well-observed, sharp and has a lot to say about modern dating culture, relationships and what it means to be gay or in the LGBTQ+ community in 2022.

While it really delivers on the comedy side, it doesn’t shy away from the romance either.

It is cute, uplifting and the way the characters learn to drop down their guards, embrace vulnerability, and fall in love is heartwarming.

Some people might find Eichner’s character quite annoying because he is seriously neurotic, dramatic, self-involved and he cannot be quiet.

On the other hand, Aaron is the strong, silent, masculine type and their opposing natures are amusing to see play out.

Bobby believes Aaron appears too straight while he’s “too gay” and his insecurities convince him that Aaron will ditch him for someone less high-maintenance.

Eichner and Macfarlane are a well-matched pair because they are so different and therefore more interesting to watch.

The Billy on the Street star is terrific at spewing Bobby’s motormouth dialogue and is the standout in every scene.

However, he is given a run for his money by Saturday Night Live‘s Bowen Yang, who makes a brief but memorable appearance as a potential investor in the museum, and Debra Messing, who is funny as a version of herself.

Bros is one of the most hilarious, entertaining movies at the cinema right now.

It is so much fun and you should come away from it with a smile plastered on your face.

In cinemas from Friday 28th October.