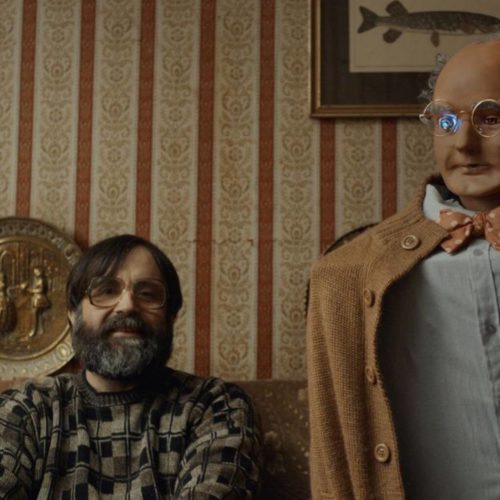 Verdict: Brian and Charles quirkiness and weirdness won't appeal to everybody but it's hilarious if the sense of humour works for you

There have been plenty of films about a man and his robot companion – but none quite as oddball as Brian and Charles.

This mockumentary-style comedy, directed by Jim Archer, tells the story of Brian (comedian David Earl), a wannabe inventor who lives alone in rural Wales and spends his days making random contraptions that hardly ever work.

One day, he comes across a mannequin head among all the junk around his property and has a light bulb moment – he should make a robot.

At first, it seems like the robot is just as redundant as most of his other inventions.

However, to Brian’s surprise, his robot (played by Chris Hayward) comes to life!

After reading the dictionary to grasp the English language, the robot announces he would like to be called Charles Petrescu.

Once he learns the ropes of daily life, Charles decides he wants to see the world and turns into a stroppy, uncontrollable teenager.

Brian and Charles is very quirky and strange. Its sense of humour is offbeat, particularly in the early scenes without Charles, and that may not go down well with some viewers.

However, if the wacky comedy suits your tastes, then you will have a ball with it.

It is hilarious and filled with laugh-out-loud moments.

The film is most in its element once Charles comes to life and starts to learn how to exist in the world.

He is the most cumbersome and awkward-looking robot ever.

His design, as well as the way he moved, spoke, and dressed were all perfectly pitched for comedy and it was so amusing watching him walk, talk, and dance (Charles loves to dance).

While Charles is the main event of the movie, there is another deeper story unfolding at the same time.

Brian has been lonely for years and he finally has a companion.

Spending time with Charles helps him gain the confidence to become friends with Hazel (Louise Brealey), who is also socially awkward, and to stand up to the village’s bully Eddie (Jamie Michie), who wants Charles for himself.

This concept originally began as a short film in 2017 and has been expanded into a feature – and you can feel that.

At certain points, the story felt like it slightly lost its sense of purpose or direction – the pace dipped and it felt a bit repetitive – and it could have been five-10 minutes shorter, despite only being 90 minutes as it is.

Brian and Charles is a lovely but weird film. It won’t appeal to everybody, but if its sense of humour works for you, you’ll be laughing non-stop – until it hits you in the feelings.

In cinemas from Friday 8th June.