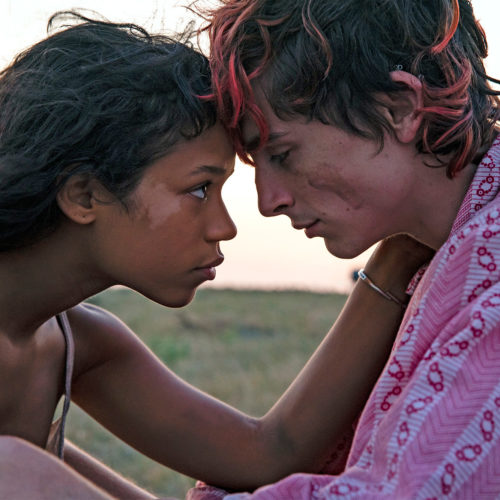 Bones and All is the new feature film from Call Me By Your Name director, Luca Guadagnino. It follows lovers and reluctant cannibals Maren and Lee on a road trip through America.

Bones and All is a romance movie, not a horror movie, but when it decides to do horror it’s genuinely sickening.

There’s an unexpected and cruel realism to its violence: It’s revolting researched. Much of it is deeply animalistic. Characters get down impulsively on all fours and tear off chunks with their mouths.

It’s a truly admirable de-eroticising of cannibalism, with none of the prestige, flirtation and gourmet that’s defined modern cannibal media. It’s much more indebted to The Hills Have Eyes than Hannibal.

The horror is so well realised that I can’t help but wish there was more of it.

Mark Rylance turns in a terrifyingly unpredictable performance, twisting between child-like innocence, stunted affection, and bizarre threat. These characters are tragic as much as they are hideous.

Because it spotlights trauma, Bones is still able to feel like a cohesive whole, emotional scars bind the horror, drama and romance and the best scenes are usually some combination of all three.

Russell and Chalamet understand this layered tone well and turn in rich performances with a deeply believable trauma bond.

I would wager this is Chalamet’s best to date, and Taylor Russell, who came out of nowhere gives a wonderfully complex and controlled performance.

A new generation of talent is really starting to consolidate itself, and it’s proving to be not only meticulously studied but encouragingly risky.

Twenty years ago, an A-listers wouldn’t be caught dead near a film like this. Interestingly this new wave (Taylor-Joy, Ortega, Goth, Russell, Chalamet, Edgar-Jones) all came up in horror, or at least dipped into it.

Of course, there’s also a slant towards the romance genre in these careers too, which makes Bones and All feel strangely on the bleeding edge of cinema’s current interests.

While I like and respect Guadagnino’s previous film, Call Me By Your Name, I personally resonate more with traumatised teens scraping through southern gothic states than I do with an afluent age-gap romance in a gated villa.

Bones has much in common with Call Me, but it all feels rather more refined and calculated.

Stylistically it sits leagues ahead of Call Me, which has a blunt documentarian style, content to lean on its lush setting to provide aesthetic interest.

Bones has equally gorgeous vistas but musters the ambition to frame them in a creative way.

It plays with light far more than Call Me, with lots of golden hour shooting, lens flares and sensual sun beams.

However, like Call Me, the period setting is almost invisible, and the narratively feels curiously timeless. Even a prominent Cyndi Lauper t-shirt feels more like a hipster throwback than a historical artifact.

In a world where the ’80s have become the easiest marketing tool in the book, I deeply admire both works in their refusal to collapse to nostalgia.

Bones also features an age gap romance, albeit a more palatable one. “You’re 18? I thought younger” are the first sentiments expressed by Timmy. However, these characters are at least roughly the same age.

In Call Me I find Armie’s interest in Timothee to be bluntly predatory, while the maturity difference in Bones is far more narrow, and the dynamics of support more mutual.

In Bones our leads fight hard to help each other with genuine baggage, violent impulses, otherness, and abject poverty.

What do the leads in Call Me struggle with? Being queer in the safest place to be queer in the entire period. Not that Call Me needed high stakes per se, but the leads in Bones are far more empathetic for sincerely struggling.

I’m not sure there’s a metaphor that tracks directly onto the pain of being an eater.

It feels intentionally open but becomes vague as a result. It could represent queerness, trauma, violent impulses, actual cannibalism, or even some combination of the four.

These ideas are taken to their logical extreme, although sometimes in a way that’s indirect and lacking finality.

Here lies the real thing that drags Bones down: its failure to resolve multiple strains of conflict.

(Minor spoilers to follow) Timmy’s character is clearly bisexual and openly cheats on our protagonist. This doesn’t lead to any conflict or even a conversation. It seems like a massive problem that lies completely unaddressed.

Stuhlberg shows tremendous range as an unstable eater and his groupee is fascinating. The pair develop an obvious grudge when our leads flee, but it’s never paid off.

Or maybe it is, but it happens in a montage that may be a dream sequence. Bones plays loosely with its diegesis, too loosely, in a way that allows it to clumsily shrug off significant plot threads.

While I think Bones has enough relevance and style to be great, it’s just a little uneven. It presents trauma with genuine vision, pushes to extremes, but never quite completes the picture.

The core is strong, but it could have hit on something truly special if it cut fewer corners.

Nevertheless, this remains a bold and harrowing marriage of Guadagnino’s greatest loves: horror and romance.