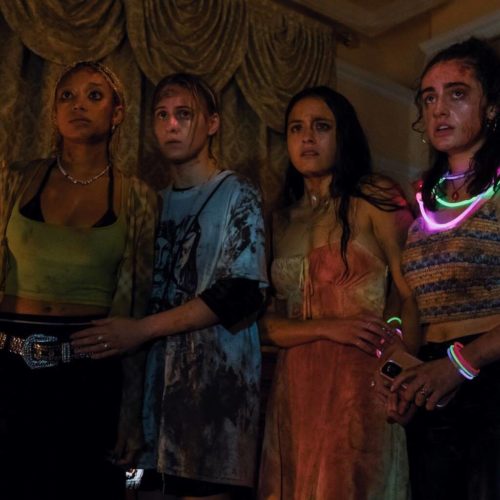 Verdict: Bodies Bodies Bodies has a strong concept, an interesting line-up of characters, and a screenplay packed full of Gen Z dialogue, but it loses its way in the middle.

Friends get picked off one by one during a house party in the middle of a hurricane in this horror comedy.

The whodunit is making quite the comeback – first See How They Run, a broad comedy, and now, Bodies Bodies Bodies, a black comedy horror.

The film is led by Amandla Stenberg and Maria Bakalova as relatively new girlfriends Sophie and Bee. Sophie brings Bee along to a “hurricane party” at her best friend David (Pete Davidson)’s house and nobody seems happy when they show up unannounced.

There is clearly a lot of history between these friends – also including Alice (Rachel Sennott), her much older boyfriend Greg (Lee Pace), Jordan (Myha’la Herrold) and David’s girlfriend Emma (Chase Sui Wonders) – and it will all unfold over the night.

During the evening, Sophie suggests playing Bodies Bodies Bodies, a game in which the person appointed the murderer goes around “killing” people one by one. Each time a new body is discovered, the group reconvene to vote for who the killer is and if they are incorrect, the game continues.

After one of them winds up genuinely dead and nobody knows who did it, the game starts to become oh so very real.

The premise is ace and it was really interesting getting to know the characters and the reasons for the tension between them. But if you’re going in expecting a full-on horror or a straight-up comedy, you might be disappointed because it’s not scary or gory (there’s plenty of blood though) and the laughs are few and far between.

Initially, you feel tense and unsettled as the characters split up and walk around the house in the dark because you’re waiting for the next person to die.

But as the body count racks up, the film devolves into messy argument scenes in which the characters shout and say shockingly awful things to each other or run around the dark house with their phone torches bobbing around.

There are also a lot of accusations and finger-pointing as it turns out that each character has a motive to kill all the others – it becomes apparent that none of these “friends” actually like each other anymore and just hang out because they’ve known each other forever.

Some of these arguments are well-written and you will gasp at some of the truly mean things that are said, but others are repetitive, sloppy, and unfocused.

By a certain point, the characters are all so suspicious or annoying that you really don’t care if any of them survive. However, the ending is unexpected, clever, and darkly funny.

The star of the show is Sennott as the outspoken and hilarious Alice and Davidson is good fun as the wealthy bad boyfriend David. All the others play their characters straight, even Borat star Bakalova, who was wasted as the serious Bee.

Bodies Bodies Bodies has a strong concept, an interesting line-up of characters, and a screenplay packed full of Gen Z dialogue, but it loses its way in the middle.