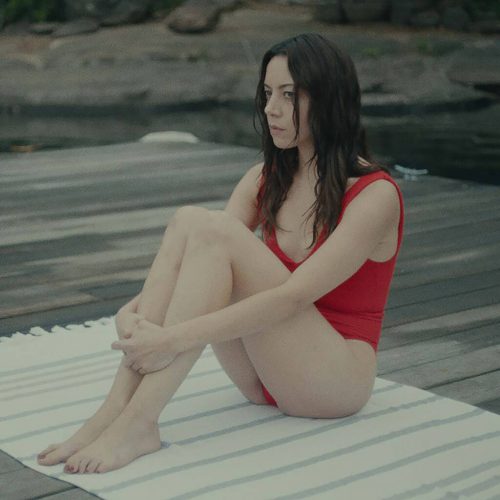 Aubrey Plaza, who is best known for her comedy work, has been impressing with her dramatic roles in recent years and she goes above and beyond what we’ve seen her achieve before in Black Bear.

This mind-boggling drama is told in two parts. In the first chapter, Plaza plays Allison, an actress-turned-filmmaker who goes to a lakeside retreat to get inspired to write her next project.

She is the only guest at the house and is entertained by the owner Gabe (Christopher Abbott) and his pregnant partner Blair (Sarah Gadon), and a heated drunken night ensues, with Blair accusing Gabe of being attracted to Allison.

In part two, their characters have the same names but their roles are different – Gabe is now a director and married to Allison, the star of the movie they are shooting at the house. Blair is her co-star and Allison is convinced she is sleeping with her husband, and becomes difficult to work with as they try to film the movie’s pivotal scene.

Black Bear, written and directed by Lawrence Michael Levine, is ambiguous and it is hard to understand how the two parts connect with each other, what is real, what is not, or which version of the characters is the true one. It is puzzling and will leave you thinking about what it all means for a while after the credits roll.

Thankfully, Levine has written such a compelling and exciting film with well-defined characters that audiences can still enjoy it despite its confusing nature.

The character dynamics were intriguing in the first chapter, while the second half is more enjoyable as it deals with the chaos that ensues behind the scenes when making a film with a drunk lead.

Plaza gives a staggering career-best performance, particularly in the second half when her character has to act out a scenario that hits a little too close to home.

Allison experiences a wide variety of emotions and Plaza throws herself into them – one minute she’s angry, rude, and obnoxious, and the next she’s insecure, vulnerable, and inconsolable.

All three leads have to play two different characters in this film and they do so with ease; there is no weak link in the main trio.

Abbott also excels in the second chapter as the frustrated director trying to get the best out of his lead, even if he has to play mind games to get Allison into her dark headspace.

Gadon comes into her own in the first half as she has a bigger, more talkative role to sink her teeth into and dominates the conversations about feminism and traditional gender roles.

Overall, Black Bear probably won’t do it for everybody because it’s quite confusing, but rest assured the writing and the performances are so impressive that they make up for this.