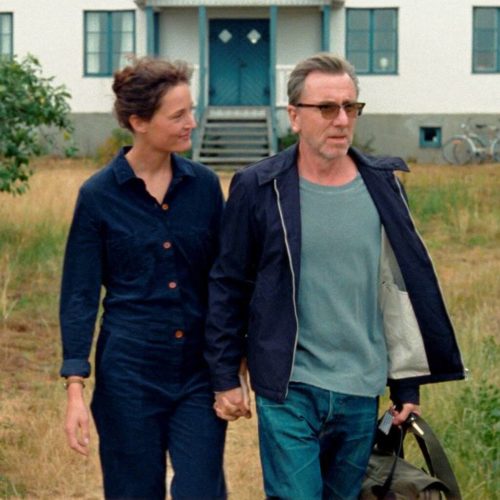 Verdict: Bergman Island shines with its movie-within-a-movie but it's a shame the film it exists within is a bit too slow and dull

Vicky Krieps and Tim Roth play filmmakers who go to the Swedish island of Fårö to work on their next screenplays.

The lines between fiction and reality begin to blur when a filmmaker starts writing her next screenplay.

Mia Hansen-Løve’s romance drama stars Vicky Krieps and Tim Roth as Chris and Tony Sanders, married filmmakers who travel to the Swedish island of Fårö, where Scenes from a Marriage director Ingmar Bergman lived and worked.

They want to escape the hustle and bustle of daily life so they can work on their respective scripts.

The narrative becomes a movie-within-a-movie once Chris shares with Tony the plot and characters she’s working with for her next film as she needs help figuring out the ending.

Once the film-within-a-film begins, you might breathe a sigh of relief as Bergman Island finally gets going.

After almost an hour of just watching Chris and Tony go about the island, hardly talking to one another, we are finally given characters and a story we can get absorbed in.

As Chris outlines her story, her characters Amy (Mia Wasikowska) and Joseph (Anders Danielsen Lie) come to life before our eyes.

Amy is a filmmaker who has always loved Joseph and is unable to resist her attraction to him every time they meet up.

This particular story focuses on a wedding they’re both attending on Fårö and the events that play out over that weekend.

You can’t help but notice the parallels between Chris and Tony’s life and wonder how much is autobiographical.

It seems as if Chris is using her story to reflect on her stagnant marriage and figure out what to do about it.

Sometimes, stopping the main narrative to tell a completely different story is quite risky as you interrupt the flow.

However, in this case, the film-within-a-film made Bergman Island so much more interesting.

The beginning had been so slow and unexciting that the new characters were immediately more gripping and captivating.

Wasikowska and Danielsen Lie are the standouts of the film, despite how little time with spent with them.

You can feel their passion and burning desire for one another as well as their complicated past. It’s a shame their parts were so small.

The lines between fiction and reality really begin to blur once the narrative returns to Chris and Tony.

The film becomes quite meta and this was both surprising and confusing.

There are a lot of references to Bergman in this – discussions about his movies and personal life, for example – but you can still understand the film if you don’t know his work.

However, you will probably appreciate those scenes more if you have this knowledge.

The relaxed beginning of Bergman Island really tests the patience but the film significantly improves once Wasikowska and Danielsen Lie come onto the scene.

In cinemas from Friday 3rd June.