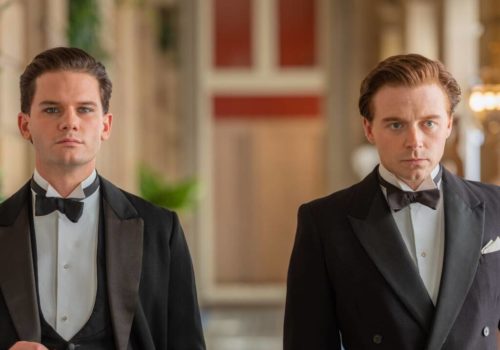 Verdict: Benediction is an insightful and enlightening watch that will leave you with a better understanding of one of Britain's great war poets.

While many of us may have heard of the name Siegfried Sassoon or be familiar with his poems, only a few may know anything beyond that – and that’s where Benediction comes in.

Terence Davies’ biographical drama begins in earnest in 1917 when Sassoon (Jack Lowden) becomes a vocal critic of World War I after returning from service.

He is sent to a psychiatric hospital over his views and befriends fellow war poet Wilfred Owen (Matthew Tennyson).

Peter Capaldi plays an older version of Sassoon, a very bitter and grumpy man who has converted to Catholicism.

Except for a small scene with Capaldi towards the start, he is saved for the third act.

It was important to include scenes demonstrating the poet’s transformation from an affable young man to a sourpuss as it showed how his choices impacted his life in the long term, but there was a bit too much of him and his section wasn’t as enjoyable as Lowden’s.

His scenes, which make up the majority of the film, are much more interesting and surprisingly funny at times.

Sassoon wants to have a committed monogamous relationship but it seems all his lovers have other ideas and don’t want to be tied to just one person.

There are some brilliantly written scenes between Sassoon and his partners, particularly when they’re about to break up.

When the film begins, it is all about the war, Sassoon’s service, and his poems.

At times, the film was interspersed with footage from the war with Lowden reciting some of Sassoon’s poetry and these were very powerful.

This device returned towards the end and that didn’t feel fitting as the film had switched its focus from the war to his relationships long before then.

Lowden gives the best performance of his career so far as the famed poet. He has a charming, likeable presence, which is in sharp contrast to Capaldi’s curmudgeonly character.

The subject matter of Benediction may not excite the masses but it’s an insightful and enlightening watch that will leave you with a better understanding of one of Britain’s great war poets.

Benediction will be released on 20th May in U.K. and Irish cinemas.