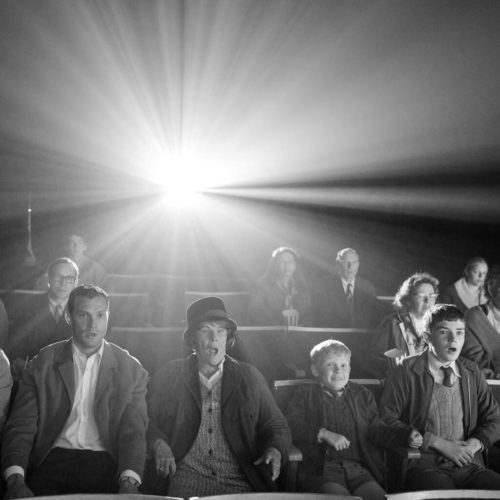 Verdict: Belfast is a wonderful film led by the adorable and charming newcomer Jude Hill. It deserves all the awards attention it's getting.

The film is told from the perspective of Buddy, a nine-year-old boy from a working class Protestant family in Belfast, Northern Ireland.

Kenneth Branagh’s latest film Belfast has been racking up the awards and nominations this season, and now, you can find out if it deserves all this acclaim.

The black-and-white semi-autobiographical film is told through the eyes of nine-year-old Buddy (Jude Hill), who comes from a working-class Protestant family in Belfast, Northern Ireland.

They get caught up in The Troubles conflict when it commences in the late ’60s and the film opens with a group of Protestants staging a riot on their street in a bid to drive the Catholics out.

Pa (Jamie Dornan), who works as a joiner in England, wants the family to move to Australia or Canada to escape the violence but Ma (Caitriona Balfe) is reluctant about leaving their home.

A common misconception about Belfast is that it’s a bleak, self-serious, and overlong film but it’s funnier, more light-hearted and shorter than it looks in promotional materials.

The Troubles conflict serves as more of a backdrop rather than being at the forefront of the story – the focus is on Buddy and his life during that difficult time and it feels like a lovely coming-of-age tale.

Branagh successfully manages to balance the tense riot scenes with the lighter family content and they work well together so it doesn’t feel jarring going between the two.

The scenes involving Buddy, a fictional version of Branagh, are simply wonderful. Branagh has written him plenty of comedic lines and the newcomer provokes many laugh-out-loud moments thanks to his adorable face and hilarious line delivery. He might not be the strongest child star ever but he’s the star of the show, despite the calibre of his co-stars.

The biggest revelation among his supporting cast is Balfe, who rightly deserves the recognition she’s received so far this awards season. Ma is effectively a single mum who has to raise two boys amid all the unpredictable violence, deal with the stress of debts, and wrestle with the decision to leave Belfast or stay put.

Dornan’s Pa is weighed down by stress and responsibility and wants to see his family more than every other weekend. He also has the constant fear of the local criminal Billy (a menacing Colin Morgan) recruiting him or his sons for ‘the cause’. Judi Dench and Ciaran Hinds are delightful additions as Buddy’s paternal grandparents.

At 98 minutes, Belfast flies by and leaves you wanting more, even just a little epilogue to show where the family ended up. It’s a wonderful and, at times, moving film that deserves all this awards attention.

In cinemas from Friday 21st January