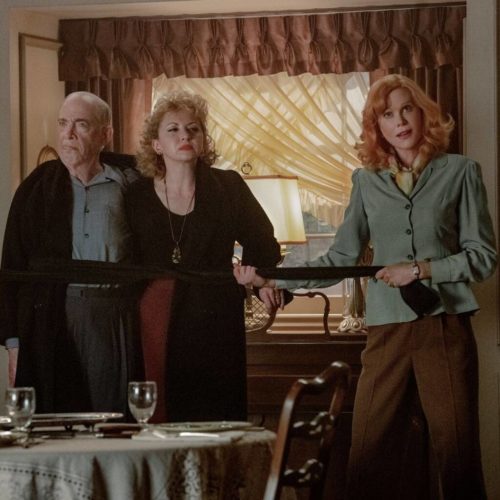 Verdict: The drama has some tonal and length issues but Nicole Kidman's magnetic performances makes it more watchable than it should be

While certain actresses might have felt intimidated by playing comedy icon Lucille Ball, Nicole Kidman rose to the occasion and delivered a magnetic performance.

Aaron Sorkin’s latest movie is set during one production week on the popular sitcom I Love Lucy, starring Ball and her real-life husband Desi Arnaz (Javier Bardem) as Lucy and Ricky Ricardo, in September 1952.

Sorkin, who also wrote the screenplay, has taken three real events from their lives and squished them into this one nightmarish week. Ball has made headlines over claims she’s a Communist, Arnaz is accused of being unfaithful in the gossip rags, and together they tell the show’s producer Jess Oppenheimer (Tony Hale) she’s pregnant with baby number two.

The main storyline, which runs from the Monday to Friday of that production week, is interspersed with flashbacks which show how Ball and Arnaz met and fell in love as well as the origins of I Love Lucy.

The film is at its best when it’s on the sitcom soundstage and we’re watching the actors and crew come together to make the popular show. Ball regularly drives the writers and crew mad by questioning their lines and blocking and suggesting alternatives to make it funnier and these conversations were interesting to watch.

We also get to see recreations of certain I Love Lucy scenes rendered in black-and-white, such as Kidman stomping around in a big vat of grapes in a comedic manner. These are lots of fun and it was a joy seeing the dramatic actress in heightened physical comedy mode.

There are some issues with the film, however. It is tonally uneven in places, it lags somewhere around the middle and was a bit too long. Also, Sorkin made the odd decision to have three talking heads pop up documentary-style during his film. The actors – all playing people who used to work on the show – provide interesting anecdotes and juicy gossip to the camera but that footage ultimately felt jarring and unnecessary.

Kidman has been nominated for Golden Globe and Critics Choice awards so far and deservedly so. She is spectacular as Ball and makes the drama more watchable than it would be otherwise. Bardem also does well as the charming Arnaz but this is Kidman’s show, without a doubt.

Their supporting cast are owed a shout out too, particularly Nina Arianda as their co-star Vivian Vance, who feels insecure in Ball’s shadow. You couldn’t help but feel sorry for her even though the focus is on Ball and Arnaz.

J.K. Simmons is as reliable as ever as Vance’s onscreen husband William Frawley (they played Fred and Ethel Mertz) and Alia Shawkat stole her scenes as writer Madelyn Pugh.

Being the Ricardos isn’t a complete success but it’s worth a watch to see Kidman shine as Ball.