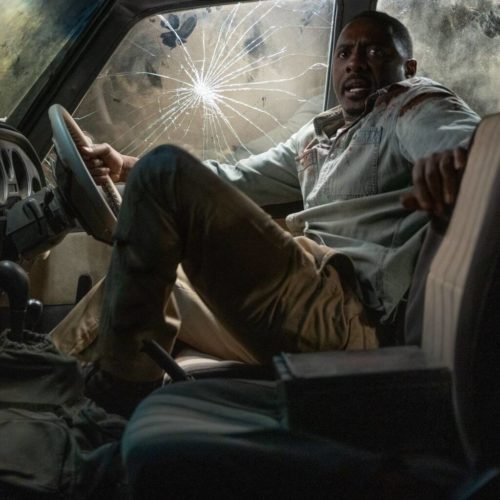 Verdict: Beast takes itself far too seriously for a ridiculous man vs lion film. Switch your brain off at the door and embrace the silliness.

Idris Elba faces off against a rogue lion on a South African game reserve in Baltasar Kormákur’s latest survival thriller.

Who will emerge victorious in a battle of man vs. lion? You’ll have to tune into Idris Elba’s new survival thriller Beast to find out.

The actor stars as Dr. Nate Samuels, a recently widowed man who takes his daughters Meredith (Iyana Halley) and Norah (Leah Sava Jeffries), who were raised in America, on a trip to South Africa to learn more about their late mother’s home.

They are hosted by Nate’s old friend Martin (Sharlto Copley), who takes them on a private tour of a game reserve. Little do they know that a rogue lion is on the hunt – a group of poachers killed his pride the night before and he is out for revenge.

Yes, the concept of this movie is extremely ridiculous but watching a man vs lion film is rather enjoyable, especially if you suspend your disbelief in certain parts. This is the epitome of mindless blockbuster fun!

Unfortunately, the film isn’t aware of how silly it is and takes itself too seriously. Kormákur should have given us a light-hearted, playful, maybe even tongue-in-cheek, movie that leans into the daft concept but he didn’t.

However, there are plenty of laugh-out-loud moments in this movie. These were probably unintentional from the director’s perspective but you won’t be able to resist a chuckle at certain decisions. If you’re able to get through the final showdown without a snigger then you should be proud.

It’s not as thinly written as you might expect a man vs. lion movie to be. A substantial amount of time is given to drama and resentments within the Samuels trio, particularly issues between Nate and his outspoken older daughter Meredith. This helps ground the action and keeps it coming back to the theme of family.

Beast also has some legitimate thrilling moments, a couple of jumps, and palpable tension whenever you know the lion is close by and gearing up to pounce.

The visual effects work on the lion is very impressive. It’s not quite 100% realistic but it’s convincing enough for the beast to feel like a threatening and sometimes scary presence. You will most likely believe you’re watching a lion rather than a digital imitation because the effects are that good.

Much like the movie, the actors play their roles straight and with complete seriousness. They are all still dealing with the loss of their wife/mother and Nate fearlessly protects his daughters like a lion would with its pride.

At only 93 minutes, Beast is an easy, breezy movie that flies by. Switch your brain off at the door and let yourself enjoy the madness.

In cinemas from Friday 26th August.