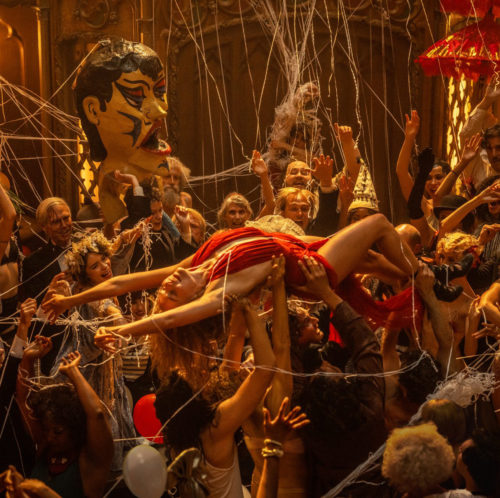 Aside from the occasional editing flourish or jazz interlude, this rarely feels like a Damien Chazelle picture at all.

Chazelle is doing his best Anderson impression and Babylon rips vast swathes of its structure, colour palette, and rhythmic dialogue from Boogie Nights.

The sequence with Toby McGuire is essentially one giant tribute to Alfred Molina’s showstopper in Boogie Nights, but it trades firecrackers for punctuating gobs of snot.

In terms of scope, it somehow manages to make the sprawling Boogie Nights look humble. Babylon is one of the most maximalist movies ever made, beating out even The Wolf of Wall Street for that dubious honour.

It’s insane how densely textured Babylon‘s parties are, how grandiose its performances, how broad its cast, how flexible its storytelling.

It’s decadence in the purest sense of the word, and your enjoyment will hinge entirely on your hedonistic appetite.

Much like Boogie Nights and the Wolf of Wall Street, Babylon tries hard to meld high and low art.

Some of its ideas regarding the cyclical and destructive nature of technology and artistic exploitation are quite insightful.

Yet it splices these ideas with grotesque, feral acts designed to amuse in the basest of ways. The first minute of the movie sees a man get covered in gallons upon gallons of elephant faeces.

Scenes like this are more at home in an Adam Sandler movie than a prestige Hollywood production.

Toilet humour aside, I think it does a good job of marrying the two ideas.

Babylon‘s argument? Cinema is pornography, a grim carnival of animal pleasures built on the blood, sweat and tears of those it’s doomed to destroy. The lurid, the sensational, are not antithetical to cinema’s success, but essential.

Babylon plays like confession. It’s a shameful, self-loathing film. It’s not very fun. The Wolf of Wall Street is fun, often in an uncomplicated way. Babylon wants you to feel bad for enjoying it.

It’s a curious tension to play for such a long run time. Even the opening party, set in the heyday of ’20s Hollywood, is intended to provoke revulsion and shock, rather than joy.

The party shown at the end is apocalyptically bleak. The overarching experience is masochistic – have fun/feel bad!! The rest of Babylon is tragedy played straight.

I think in any other movie this kind of self-defeating pity would really annoy me, yet Babylon pulls it off.

If it aims to destroy cinema, then it knows it must also destroy itself. People have called this a suicide note, but that’s much too gentle a comparison. Babylon is a suicide bomb.

The film even destroys itself in its final moments, becoming bleeding colours and slashed celluloid. Damien Chazelle seems deeply disenfranchised with the film industry, the power and acclaim it’s given him, and the exploitation he’s complicit in.

Manny and Nellie’s disastrous romance reads like an apology for Whiplash‘s ambivalence towards abusive artistic relationships.

If Manny is a stand-in for Chazelle, a foreigner who’s ambition drives him hideously towards the Hollywood machine and self-destruction, then Nellie isn’t an actor or muse, but cinema itself.

Nellie and Manny only enable each other’s worst traits. They make each other cruel, narcissistic, tyrannical. They were never really in love, they just convinced themselves they were.

How can Damien Chazelle ever make another movie? Maybe his true love was always jazz. Maybe cinema was just a mad love affair

I hope that’s not the case, however. Babylon hits highs that most directors can’t touch in their entire career.

Chazelle’s command of sound is glorious. He’s a master of noise.

The first act is marked by an abundance of sound, a thick wall of irrelevant, chaotic, wonderful sound.

In the second act, sound becomes an intruder, a villain, a thief. Threatening.

Babylon‘s sound becomes much more measured, much more conscious after the advent of the talkie.

Moments of silence slice through scenes like razor wire, reminders of a simpler time, while the jazz compositions are brash, hypnotic, and woven artfully into scene staging.

The film is bound by layers and layers of sociological arcs.

One subtle turn I found particularly pointed is the treatment of minorities.

The opening party, despite being utterly decadent, is a space where everyone, regardless of race, gender, or body can exist in harmony, united in lust.

As the film progresses, we see minorities become subjugated hideously, parties find spectacle only in their abuse.

Damien Chazelle is afflicted by that greatest tragedy, in which skill has outpaced passion.

Despite falling out of love with cinema, he’s tantalisingly close to mastering it.

The final sequence, despite being bloated, messy and emotionally overwrought, really does touch the great void at the heart of film.

How fitting that the total annihilation of cinema is sometimes also the best example of it.