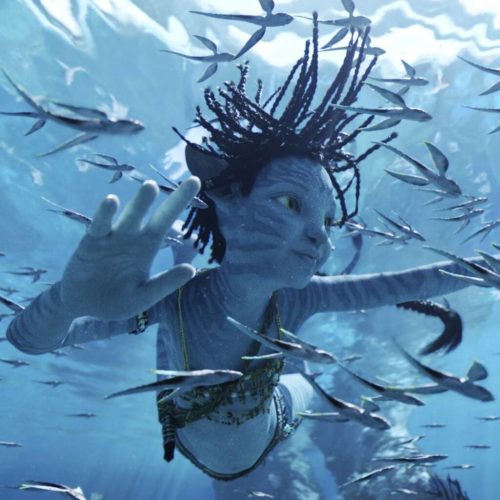 Avatar: The Way of Water

Verdict: This sequel is a staggering visual effects achievement with very little substance under its beautiful surface.

James Cameron returns to the moon Pandora after 13 years to follow more adventures of Jake Sully, Neytiri and their family.

James Cameron’s 2009 blockbuster Avatar was a box office sensation – and it still remains the highest-grossing movie of all time.

And now, he is revisiting the franchise after a 13-year wait.

When Colonel Miles Quaritch (Stephen Lang) returns, he makes it his mission to hunt down Jake, so he and his family decide to relocate from their forest home to a new reef community.

This sequel is one of the most visually astonishing films you will ever see. It is a beautiful and magical cinematic spectacle that you can only truly appreciate on the big screen.

The world-building of the forest in Pandora was mind-blowing in the first film, but the oceanside community is even more awe-inspiring – prepare to be wowed watching the children swim with sea creatures.

Cameron revived the 3D trend back in 2009 and he’s bringing it back again now.

While the technology can be hit or miss in other films, it really works in this context and it enhances the immersive experience.

He also pushes the technical boundaries in another way – he experiments with the frame rate, which is the speed at which the images appear on screen.

Some scenes are in the traditional 24 frames per second, but others in 48fps. It’ll take a while for your eyes to adjust to the speed and those scenes look more like a video game than a movie.

However, it feels like Cameron spent so much time thinking about the groundbreaking visuals that he forgot to stop and think about the story.

There is hardly any story development or character development in this film, which is outrageous given that it’s (unnecessarily) three hours and 12 minutes long.

The story is so flimsy and similar to the first film, and at the end, you realise it hasn’t moved on much from where it started.

The script is weak and doesn’t serve the returning characters particularly well – Neytiri has barely anything to do, Jake is very dull and Miles is a one-note cliched villain.

Kate Winslet’s arrival to the franchise as Ronal is very underwhelming, so hopefully she will have more to do in the next instalments.

The children are the stars of the show, particularly the adorable Tuk and the complex teenager Kiri, who is the only one with any real depth.

Avatar: The Way of Water is a staggering visual effects achievement that requires the cinema experience – so it’s a shame there isn’t much substance under its beautiful surface.

In cinemas from Friday 16th December.