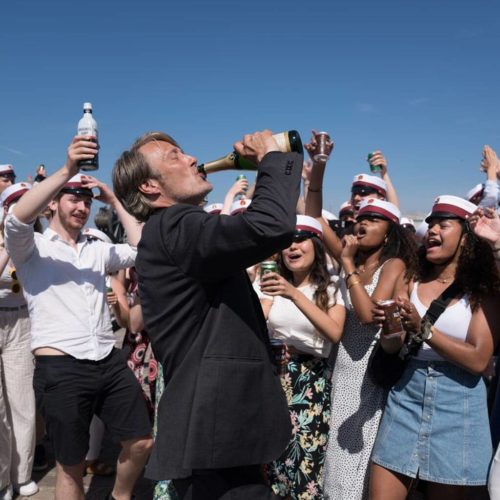 Verdict: The concept is excellent, the film experts balances the light and dark, and the cast deliver the goods. One to watch!

Mads Mikkelsen and his friends experiment with having a constant level of alcohol in their blood in this Oscar-winning film.

Thomas Vinterberg’s Another Round won the Best International Feature Film Oscar back in April, and now, U.K. audiences can finally see what all the buzz is about.

The comedy-drama follows four friends – Martin (Mads Mikkelsen), Nikolaj (Magnus Millang), Tommy (Thomas Bo Larsen), and Peter (Lars Ranthe) – who teach at the same school and are fed up with their lives in both a professional and personal sense.

Martin, for example, teaches history with such dull monotony the students are genuinely concerned about their grades, while he and his wife Anika (Maria Bonnevie) are like passing ships in the night and have lost the ability to communicate with each other.

The four pals decide to test the theory that their lives will improve if they maintain a constant level of alcohol in their blood.

They start small and take reasonable amounts of alcohol during their workday but, as to be expected, once they’ve had a taste of the confidence and lust for life it gives them, they want more and more and the experiment spirals out of control.

Vinterberg has come up with a unique and terrific concept and created a film that strikes the perfect balance between being fun and entertaining to watch, with plenty of comedic moments, to being poignant and sad.

It’s enjoyable watching these men find enthusiasm in their lives again but when they start to regress into irresponsible teens, you can’t help but feel tense because you know it’s going too far and the direction it’s heading in isn’t going to be good.

Mikkelsen is fantastic as a man trying to fix his marriage, keep his family together and get out of his mid-life crisis.

His transformation from this introverted and monosyllabic man to one filled with confidence, vigour, and vitality was a joy to behold, and his dance sequence will put the biggest smile on your face, guaranteed.

The other standout of the foursome was Millang as Nikolaj, who truly spearheads the experiment to escape from his demanding wife and young children.

There is a reason why Another Round, originally titled Druk in Denmark, won the Oscar – it is a brilliant film that’s definitely worth a watch.

The fact that Leonardo DiCaprio has bought the rights to make an English-language remake is a testament to how good it is.

In cinemas from Friday 2nd July.