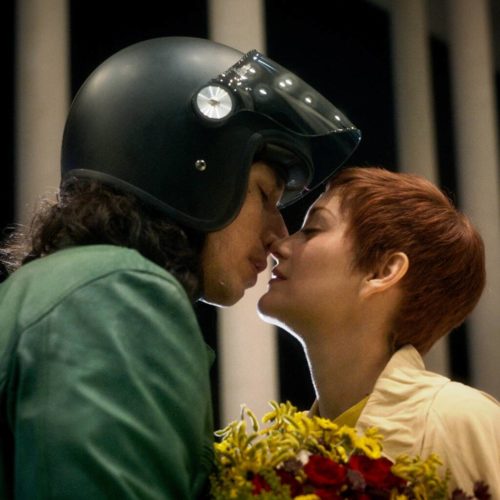 Verdict: Annette is bonkers and experimental and won't be for everyone, but there's no denying that Adarm Driver and Simon Helberg are terrific

Adam Driver and Marion Cotillard play a comedian and opera singer who fall in love in this oddball movie musical.

After its debut at the Cannes Film Festival in July, it instantly became clear that Annette had divided the audience. Will you like or loathe Annette? There’s only one way to find out.

Leos Carax’s English-language debut, a musical co-written by Ron and Russell Mael of Sparks, stars Adam Driver as stand-up comedian Henry McHenry, who falls in love with famous opera singer Ann Defrasnoux (Marion Cotillard). They get married and have a daughter named Annette, portrayed by a wooden marionette puppet, who has her mother’s gift for singing. Henry becomes jealous of their talent and success as his career takes a downturn, with devastating consequences.

Annette isn’t for everyone. Carax makes bold and experimental filmmaking choices, resulting in a film that is weird and absolutely mad. It’s very hard to get past the craziness of it all and simply enjoy the story because it’s just so bonkers but it does eventually hit its stride after Henry’s onstage meltdown, perhaps because you are more used to and accepting of its quirks by that point. The second half is the strongest section but ultimately the film is way too long and feels like a slog at 2 hours 20 minutes.

The whole issue of Annette being a puppet is bizarre and you can’t help but laugh at that fact sometimes, but the craftmanship of Annette was really impressive and she moved in a creepily life-like way.

If you’re expecting a traditional upbeat movie musical, you will be sorely disappointed. With the exception of the meta opening song, So May We Start, which is super catchy, the musical numbers all sounded so similar and were rather forgettable.

This film is Driver’s show and he gives a stunning performance as Henry. He really throws himself into the absurdity of it all and has a commanding, captivating presence. It was impressive watching Driver’s Henry lose his mind with jealousy and resentment, and his onstage meltdown is rather uncomfortable to watch.

Cotillard’s character isn’t quite so well fleshed out; Ann is almost like Henry’s glossy vision of her rather than the actual person but the French actress was perfectly cast in the role.

Although the leads are very good, the person who deserves the most awards attention is Simon Helberg – best known for playing Howard Wolowitz in The Big Bang Theory – for his supporting role as The Accompanist. He plays a very different character and did a lot with the handful of scenes he was in.

In fact, he deserves a nomination for basically just his one terrific standout scene in which he talks to the camera while conducting an orchestra. It is extraordinary and proves that Helberg is capable of so much more than we’ve seen from him so far.

Carax make some big and bold choices with Annette and the result is a over-long oddball piece that is all over the place – you’ll have to check it out for yourself to find out if it’s up your street or not.

In cinemas from Friday 3rd September.