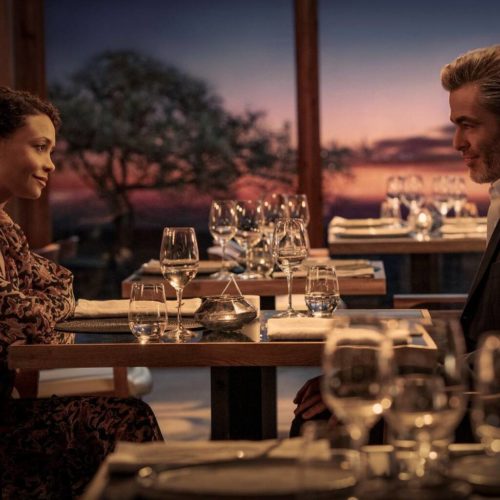 All the Old Knives

Verdict: Chris Pine and Thandie Newton are let down by a muddled screenplay and clunky storytelling that stops the film from shining until the end

Chris Pine and Thandiwe Newton plays CIA agents and former lovers who meet up to discuss a disaster that occurred eight years before.

After being away from our screens for a couple of years, Chris Pine returns in CIA espionage thriller All the Old Knives.

After a new piece of information comes to light about a hijacking disaster eight years before, his boss Vick (Laurence Fishburne) orders him to find out which agent leaked vital details to the hijackers, preventing the CIA from saving the hostages on board.

Henry’s task leads him to London, where he interrogates former colleague Bill Compton (Jonathan Pryce), and then to California, where he meets ex-spy and former lover Celia (Thandiwe Newton) for dinner to discuss the failed rescue mission.

The majority of the film is set within an upmarket restaurant in Carmel-by-the-Sea in 2020 and follows Henry and Celia as they do a thorough post-mortem of the incident, the days leading up to it and their movements during the hijacking.

Their conversation is often accompanied by a flashback to 2012 Vienna to illustrate what they say happened.

The film jumps around timelines and locations a lot in the beginning and it is quite a struggle to get into it.

It finds its footing once it settles upon the two timelines – 2012 Vienna and 2020 Carmel – but the narrative is still rather clunky and hard to follow.

The storytelling feels more convoluted and clumsy than it needs to be.

As it revolves around this central discussion, it means Pine and Newton are given a lot of information and context to divulge during the conversation and it feels unnatural for former lovers and colleagues to talk in this way.

They knew each other intimately during that time so they are already aware of what happened – it is clearly for the audience’s benefit.

Once the groundwork is laid, it gets juicier and more interesting as it progresses but it never becomes fully gripping or thrilling until the final 30 minutes.

The third act really drives up the excitement and comes to a stunning reveal.

Pine and Newton are both excellent – they do subtle work as they are mostly just sat chatting over a meal but they make it watchable and try their best to breathe life into the muddled screenplay.

All the Old Knives will test your patience and concentration with its convoluted storytelling but you will be rewarded with a satisfying conclusion.