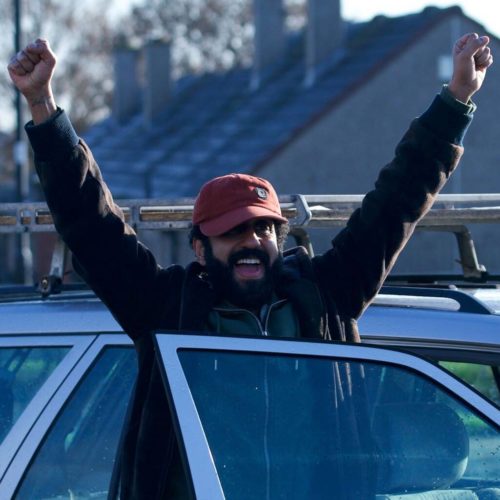 Verdict: Ali & Ava is a delightful, life-affirming romance drama with an impressive turn from Adeel Akhtar

Ali & Ava was recently nominated for the Outstanding British Film BAFTA and you can decide for yourselves if the nod was deserved as the indie movie is now in cinemas.

Indie filmmaker Clio Barnard’s latest movie stars Adeel Akhtar as Ali and Claire Rushbrook as Ava. Set in Bradford, the landlord and classroom assistant meet one day when Ali collects his tenants’ daughter Sofia from school and offers Ava a lift home to get out of the pouring rain.

The pair form an instant connection and become unlikely friends and maybe something more, although there are many hurdles stopping them from having a smooth romance and they are both still trying to deal with the fallout from previous relationships.

Ali & Ava isn’t particularly revolutionary and the script could have been fleshed out more, but you’ll easily forget those quibbles because it tells such a lovely, life-affirming story.

The film has many light, amusing moments but it surprisingly tackles darker themes and becomes more touching and moving than you might expect. You’ll likely become invested in these two lonely people and their newfound romance and hope they can resolve all the issues setting them back so they can be together and live a happier, stress-free life.

In one of their earlier conversations, Ali states that he loves thumping dance music and Ava prefers country and folk tunes and the musical undercurrent is maintained throughout the movie. Ali listens to music constantly and we often watch him getting lost and tuning out reality with his headphones on. The soundtrack is cool and seeing Ali rapping or dancing like no one’s watching was a joy.

Both of the leads give tender, heartfelt performances and work well together. However, the standout performer was Akhtar, who rightly won the British Independent Film Award and is currently nominated for a BAFTA for this role. Ali goes from 0-100 in no time at all and he can be down and full of sorrow one moment and full of charm and energy the next.

They are supported by Ellora Torchia as Ali’s estranged wife Runa, and Shaun Thomas, Natalie Gavin and Mona Goodwin as Ava’s grown-up children.

Ali & Ava is delightful and heartwarming – watching two unlikely people getting together against the odds never fails to put a smile on the face!

In cinemas from Friday 4th March.